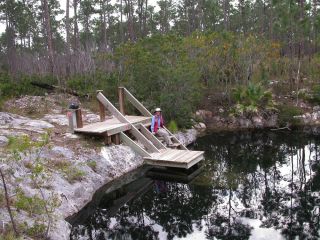 A graveyard of fossils was found at the bottom of a flooded sinkhole known as Sawmill Sink, located on Abaco Island.
(Image: © Image courtesy of Janet Franklin, Arizona State University)

If humans had never set foot in the Bahamas, the islands today might be teeming with Cuban crocodiles, Albury's tortoises and rock iguanas.

These creatures survived the thawing of the last ice age, but not the arrival of people, a new study finds. On Abaco Island, a graveyard of fossils at the bottom of a flooded sinkhole suggests that humans caused more animals to go extinct than natural changes in the climate, the researchers said.

The new study, published today (Oct. 19) in the journal Proceedings of the National Academy of Sciences, shows that 17 species, all of them birds, disappeared from Abaco during the transition from the Pleistocene to the Holocene epoch. But when humans showed up about 1,000 years ago, 22 more species of reptiles, birds and mammals vanished. [6 Extinct Animals That Could Be Brought Back to Life]

"These animals could make it through the natural changes of the ice age to the modern climate—the island getting smaller, the climate getting warmer and wetter —but the human-caused changes were too much for them," said David Steadman, an ornithologist and paleontologist at the Florida Museum of Natural History, who led the study.

The fossils were collected from Sawmill Sink, a forbidding blue hole in a pine forest on Abaco Island. The top 30 feet (9 meters) of the sinkhole is filled with clear freshwater that's easy to dive in. But underneath that is a 15- to 20-foot (4.5 to 6 m) layer of opaque water saturated with hydrogen sulfide that blocks out all light and is corrosive to human skin. Still below that is a layer of salt water depleted of the oxygen that would otherwise fuel the growth of bone-decaying fungus and bacteria.

These harsh conditions led to the spectacular preservation of fossils in Sawmill Sink but also deterred human exploration —that is, until 2004, when Brian Kakuk, an expert cave diver, was able to venture through the toxic layer using special protective equipment. He came back with amazing photographs of complete skeletons of animals like crocodiles and tortoises, and since 2007, a team of scientists has been studying the site and collecting specimens.

When fossils were first deposited in the sink some 15,000 years ago, Earth was in the throes of its last ice age. The sea level was about 300 feet (90 m) lower, Abaco covered 15 times more land area, the soil was drier and temperatures on the island were cooler, Steadman told Live Science. The environment was more hospitable for species that today live in grasslands or open pine woodlands, he added. Sawmill Sink was a high and dry cave, located much farther inland than it is today. [Wipe Out: History's Most Mysterious Extinctions]

The larger species, such as crocodiles and tortoises, found in the sink likely tumbled to their deaths, Steadman said. But the majority of bones came from smaller species, and were likely deposited in the cave by barn owls.

Barn owls are paleontologists' friends, Steadman said. They tend to nest in caves and after they sample the local fauna, they cough up pellets with undigested bones of their prey.

"In a 1-gallon Ziploc bag of this wet sediment from an owl roost site, you might retrieve 800 or 1,000 identifiable bones," Steadman said.

Many of the bones in Sawmill Sink are found along ledges that look like they could have been an owl's roost in drier times, he added.

So far, the team has documented 95 species. Of the 39 species that are no longer found on Abaco, 22 of them survived the end of the ice age but vanished after humans arrived 1,000 years ago.

Some of the larger, meat-rich species were likely driven to extinction on Abaco because of hunting.

"You don't want to have your toddlers running around with terrestrial crocodiles, so I think people hunted them out," Steadman said. "And you don't have to be that much of a hunter to hunt a tortoise."

But smaller animals, such as bats and birds, more likely vanished from the island due to human habitat modification, such as agricultural burning during the dry season. Habitat loss remains a major threat to species in the Bahamas and, Steadman thinks the study's results paint a grim picture for the future of the island's biodiversity.

"People think 1,000 years is a long time, but our study shows that we really need to start thinking in longer time frames," Steadman said. "If we're losing that high of a percentage over a millennium, is anything going to be left by the time we get to the next ice age? If you start looking at it in longer time frames, an extinction rate of even 10 percent of the local fauna over 1,000 years is not sustainable in the long run."