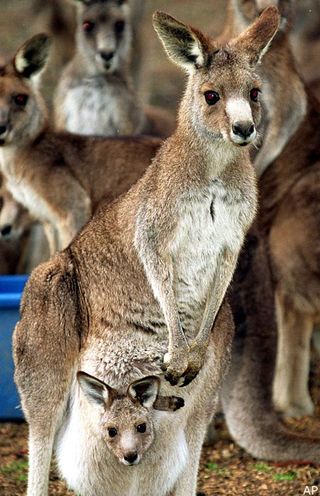 A kangaroo and her joey, in an Australian recreational park.
(Image: © AP)

And they've found the Aussie icon has more in common with humans than scientists had thought. The kangaroo last shared a common ancestor with humans 150 million years ago.

"We've been surprised at how similar the genomes are," said Jenny Graves, director of the government-backed research effort. "Great chunks of the genome are virtually identical."

The scientists also discovered 14 previously unknown genes in the kangaroo and suspect the same ones are also in humans, Graves said.

The animal whose DNA was decoded is a small kangaroo known as a Tammar wallaby and named Matilda. Researchers working with the government-funded Centre of Excellence for Kangaroo Genomics sequenced Matilda's DNA last year. Last week, they finished putting the pieces of the sequence together to form a genetic map. The group plans to publish the research next year, Graves said.

Scientists have already untangled the DNA of around two dozen mammals, including mice and chimps, which are closer to humans on the evolutionary timeline. But Graves said it's the kangaroo's distance from people that make its genetic map helpful in understanding how humans evolved.

By lining up the genomes of different species, scientists can spot genes they never knew existed and figure out what DNA features have stayed the same or changed over time. Elements that have remained the same are usually important, Graves said.

The research is an important step in the understanding of genomes in general, said geneticist Bill Sherman, an associate professor of molecular ecology and conservation biology at the University of New South Wales.

But another genetic researcher was more skeptical of the project's significance.

"If you are in Australia and you want to show that you are a major player in genomics, then it's important," said Penn State University biology and computer science professor Webb Miller. "But two guys in their garage are going to sequence another marsupial very soon."

Those "two guys" are Miller and Penn State colleague Stephan Schuster, who are working on a shoestring budget to map the genome of the Tasmanian devil, which is in danger of extinction because of a contagious facial tumor disease. Miller and Schuster said their project could lead to a way to keep the species alive.

This isn't the first time Australia's unique wildlife has provided evolutionary clues. Earlier this year, scientists mapped the DNA of a platypus and found that it crosses different classifications of animals.