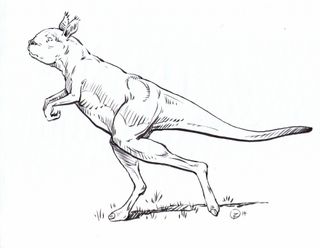 The ancestors of modern-day kangaroos, giant marsupials with rabbitlike faces, may have walked upright on two feet, sans any hopping, a new study finds.

These enormous creatures, part of the extinct family of sthenurine kangaroos, once roamed the Australian outback from about 100,000 to 30,000 years ago. But they were likely bad hoppers, said lead researcher Christine Janis, a professor of ecology and evolutionary biology at Brown University in Rhode Island.

"Modern large kangaroos are not the 'norm' for kangaroos," Janis told Live Science. "In fact, they appear to be more like a cheetah in comparison with other large cats — slimly built and streamlined for specialized, fast locomotion." [Photos: See How Kangaroos Use Their Tails to Walk]

Janis and her colleagues traveled to about half a dozen museums around the world, measuring the bones of 140 kangaroos, including sthenurine and wallaby skeletons.

The largest kangaroo (Procoptodon goliah) weighed an estimated 529 pounds (240 kilograms), or about three times the weight of today's kangaroos. Their enormous size may have prevented them from hopping, and analyses show that their bodies were configured differently than their modern ancestors.

For instance, the anatomy of sthenurines suggests they held their bodies in an upright position, and could support their weight on one leg at a time by using their large hips, knees and stabilized ankle joints.

It's possible that smaller sthenurine kangaroos hopped sometimes, though "not as fast and gracefully as a modern big kangaroo," Janis said. "But when moving slowly, they would have walked on two legs rather than using the movement that modern kangaroos do, which is to walk on all fours using the tail as a 'fifth limb.'"

"Apart from their massive size, solid bodies and relatively short faces, these extinct kangaroos lacked the specializations for high-speed hopping seen in modern-day kangaroos, such as a flexible spine, proportionately long legs, and large tail," said Karen Black, an Australian Research Council postdoctoral fellow of palaeontology at the University of New South Wales in Australia, who was not involved in the study.

"Instead, these guys show adaptations (such as a more rigid spine, larger hips, larger knees and a reduced tail) for a more upright posture and bipedal walking (more like humans)," Black said in an email.

She called the study about these short-faced giants "very sound," even though it's hard to imagine "giant kangaroos striding through the bush when most living kangaroos are efficient, superfast hoppers," she said.

The project began when Janis visited a museum in Sydney, Australia, in 2005. There, she noticed a sthenurine skeleton, particularly the beast's sturdy spine. It didn't look flexible, she said. [See Photos of Kangaroos and Other Cute Marsupials]

"I thought, 'that looks really weird,'" Janis said."I wonder if they hopped like modern kangaroos do?"

She and her colleagues then spent years studying the biomechanics of kangaroo skeletons. They weren't the first to note differences between sthenurines and modern red and grey kangaroos. Other researchers have noted that sthenurines had teeth made for browsing leaves on trees and shrubs rather than grazing on grasses, as red kangaroos do today.

Kangaroos today can hop at fast speeds, and move on all fours — five if you count the tail — for slower speeds. These movements involve a flexible backbone, sturdy tail and hands that can support their body weight. In contrast, the sthenurines the researchers studied didn't have any of these qualities.

Yet, kangaroo locomotion is a hotly debated field among paleontologists, said Natalie Warburton, a senior lecturer of anatomy at Murdoch University in Australia, who was not involved in the new study. It's possible that the extinct kangaroo did, in fact, hop, some say, whereas others think the marsupials' giant body size would have prevented them from moving like their modern ancestors, Warburton said.

"One of the things that makes the question hard to answer is that there are many similarities between the skeletons of living and extinct kangaroos, and that for the most part, the group we refer to as Macropodoidea (kangaroos, wallabies and their relatives) have evolved to [support] bipedal hopping locomotion, perhaps more than once," Warburtonwrote in an email.

The interpretation that giant kangaroos walked, rather than hopped, certainly is novel, Warburton said. "I suspect that the locomotion of sthenurines will continue to be debated, but that is what science is about — proposing hypotheses based on the available evidence and then testing them."

It's unclear whether the sthenurines' possible reliance on walking led to their extinction, perhaps from human hunters or by being unable to travel quickly enough to reach food as the climate turned more arid, the researchers of the new study said.

"We should appreciate the diversity of different kangaroos alive today," and make sure that modern animals don't go the way of their predecessors, Janis said.

The study was published today (Oct. 15) in PLOS ONE.