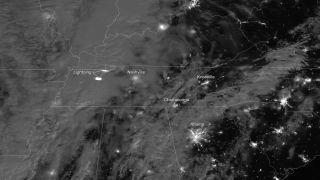 A lightning flash from a line of severe thunderstorms sweeping across the eastern United States was spotted from space by the Suomi NPP satellite on the night of Jan. 29, 2013.
(Image: © NASA/NOAA)

A line of severe storms, reaching from Pittsburgh to the Gulf Coast, is currently sweeping its way across the eastern United States. The system started rolling through the mid-South and parts of the Midwest yesterday (Jan. 29), and a satellite snapped a nighttime view of a lightning flash generated by the storms.

The Suomi NPP satellite, run jointly by NASA and the National Oceanic and Atmospheric Administration, flew over the satellite activity last night. Because of the near-full moon, the satellite was able to see details of the storm clouds that would only be visible during daylight hours to other satellites, according to a NOAA statement.

Where not blocked by the clouds, the lights of several major southern cities, including Atlanta, Nashville, Tenn., and Chattanooga, Tenn., are clearly visible. Two very bright lights in western Tennessee, though, are not cities at all, but lightning flashes caught by Suomi NPP.

The system brought severe weather to the Mississippi, Ohio and Tennessee valleys yesterday, with the National Weather Service issuing several tornado watches and severe thunderstorm warnings. The system continued raging overnight, bringing the threat of nighttime tornadoes, which can be particularly deadly, as people tend to be in bed and unaware of warnings and the storms are harder to see as they bear down. The threat of deadly nighttime tornadoes is exacerbated in the winter with the season's shorter daylight hours.

The potential for severe weather extends from the Southeast up to New York City today, with the possibilities of locally heavy winds and rains.

There have been 430 severe thunderstorm reports, 20 large hail reports and nine tornado reports as of 1 p.m. EST, according to The Weather Channel. One death has been confirmed from a tornado that hit Adairsville, Ga. A tornado that hit Mt. Juliet, Tenn., in the early morning hours was confirmed to be an EF-2 on the tornado damage scale, with maximum winds of 115 mph (185 kph), according to the Nashville National Weather Service office.

Accuweather.com warned that rains from the line of storms would hit the I-95 corridor around rush hour this evening from New Jersey to South Carolina.