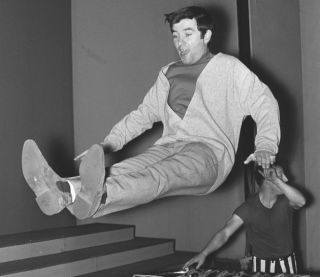 British comedian Jimmy Tarbuck tries out a trampoline during rehearsals for 'Sunday Night at the London Palladium' in 1966, amid the trampoline's heyday. AP Photo

Injuries from backyard trampolines have nearly doubled in the past decade as popularity has risen, according to a new U.S. study that recommends parents get rid of the dangerous things.

In 2001 and 2002, the most recent years for which complete data were available, nearly 75,000 children visited emergency rooms for trampoline injuries. The estimate is based on a sample of nationwide emergency facilities. A similar study of data from 1994 and 1995 revealed less than 42,000 trampoline injuries in both those years.

Of the injuries noted in the study, 91 percent occurred at home.

"Trampolines should not be used in the home environment," James Linakis, a pediatric emergency physician at the Rhode Island Hospital's Hasbro Children's Hospital and an associate professor of emergency medicine and pediatrics at Brown Medical School.

"They should be used in very structured, well-monitored environments, with proper supervision," Linakis said. "Frankly, that supervision probably doesn't and can't happen at home,"

The study was presented Sunday at the annual meeting of the Pediatric Academic Societies.

Injuries requiring hospitalization rose from 1,400 annually in the mid-90s study to 2,128 annually in 2001-02. Bone fractures and dislocated joints were the main reason for hospital stays. The more recent study revealed a rise in cuts, too.

Trampolines were popular in the early 1960s. At first, people stretched the flinging fabric over holes in the ground. The Jumpsville Trampoline Center in Southern California had several designed in this manner in 1960. Later they were built on legs or poles, with precariously large gaps around the edges and nothing to keep a jumper from falling off.

Some modern versions are ringed by nets designed to keep kids from falling off. Others are not. Advertisers promote "big air" and other daring aspects of the devices. Kids love them.

This week's study is not the first to be accompanied by a warning to parents.

Here's what that study's lead researcher, Gary Smith, director of emergency medicine at Children's Hospital of Columbus and assistant professor of pediatrics at Ohio State University, said then: "I think it is time to say that trampolines are simply unsafe for the home setting. Home trampoline use is something that we should consider unsafe for children, and it should be stopped."