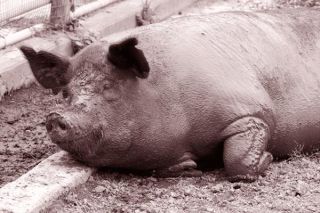 Releasing a hog into the wild is now illegal in Kentucky.
(Image: © Dreamstime.com)

A number of new laws went into effect after the toll of midnight on Dec. 31, and from the wise to the wacky, they're now officially on the books in states across America.

In Kentucky, for example, it's illegal to release a feral hog into the wild. The law makes sense, according to Politico, because wild hogs have been running amok in Kentucky's farmland, destroying crops and spreading disease.

Though the U.S. Department of Agriculture has been using gun-equipped helicopters to cull packs of wild hogs in the state, their populations continue to increase. The beasts are now found in 37 of Kentucky's counties, up from 19 counties in 2009, reports Politico.

The state of Illinois has dealt a blow to necrophiliacs, specifically outlawing sex with a corpse for the first time. Previously, the only charge authorities could level was "criminal damage to property."

"The death of a loved one is bad enough, but it should be much more than criminal damaged property," state Rep. Daniel Beiser told the St. Louis Post-Dispatch. "This is a completely inappropriate charge."

Some of the new laws are simply efforts at updating states' legal codes. "Many bills are passed to clean up past mistakes or to eliminate archaic laws passed decades ago," Robert Stern, former president of theCenter for Governmental Studiesin California, told the Christian Science Monitor.

Kentucky, for example, has finally deleted phrases from its constitution that detail pensions due to Confederate soldiers.

However, other new laws range from odd to obvious.

"It's crazy to say that you have to have work, to look for work," Oregon's Senate President Peter Courtney told the Oregonian. New Jersey already has a similar law on the books.

And employers in Illinois are now forbidden from requesting the passwords to job applicants' Twitter and Facebook accounts, following an outcry from privacy advocates and civil liberties groups.

In California, hunters will run afoul of the law if they use dogs to chase down bears or bobcats. Not only does this protect the dogs from attack, it keeps hunters from treeing their quarry, which makes them easy targets, according to Politico.

Some new state laws are common-sense legislation designed to protect children. The sale of smokeless e-cigarettes to minors is now illegal in California — legislators feared they were gateways to cigarette use — while in Illinois, convicted sex offenders are forbidden from passing out candy at Halloween or dressing up as the Easter Bunny or Santa Claus, according to Politico.