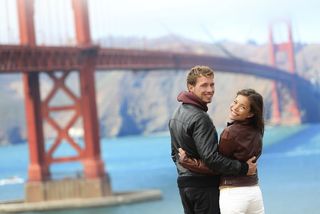 A Gallup poll has found that happiness with your home city goes hand-in-hand with health.
(Image: © Maridav, Shutterstock)

Entrepreneurs are more stressed, but happier than other workers. People who like their home cities report better health. Republicans are bummed about President Barack Obama's reelection. Middle-age puts you at the biggest risk of being fat.

Those findings are among the Gallup polling agency's top insights about health and happiness in America in 2012.

As part of the Gallup-Healthways Well-Being Index, tens of thousands of Americans are surveyed every year about all aspects of their lives, from their financial security and health habits to their emotional state and overall satisfaction with life. Here are 10 findings from these polls that Gallup's editors say intrigued them the most this year:

1. Stressed entrepreneurs are happier and healthier than other workers

Entrepreneurs experience more worry and stress than other workers, but they also report more positive experiences on the job, Gallup found in 2012. In particular, entrepreneurs are more optimistic and more likely to report that they learned something new or felt enjoyment in the past workday.

And being your own boss comes with a health edge, too. Entrepreneurs are less likely to have chronic diagnoses, such as high cholesterol, high blood pressure and diabetes. They also are much less likely to be obese than other workers (19 percent vs. 25 percent), Gallup found. [7 Things That Will Make You Happy]

After a provision in the Affordable Care Act allowed children to stay on their parents' health plans until age 26, a growing number of young Americans have reported having health coverage. Since that rule went into effect in 2010, the number of uninsured 18- to 25-year-olds without insurance dropped by 3.8 percentage points to 24.2 percent in 2011. In 2012 that figure shrank to 23.4 percent, according to the polling group.

At the same time, the percentage of uninsured 26- to 64-year-olds is still trending higher — standing at 19.4 percent in the third quarter of 2012, up from 15 percent in January 2008, when Gallup first started tracking Americans' health insurance coverage.

3. Liking where you live could be good for your health

This year, Gallup found that people who say they are satisfied with their community are less likely to report physical pain, obesity, headaches or a diagnosis of asthma or high cholesterol than those who aren't satisfied. People who like their home cities scored an average of 78 on Gallup's physical health index, compared with an average score of 69.1 for those who don't like where they live.

It might be that location can determine access to healthy food and opportunities for exercise. For example, people who said their community offered a safe place to exercise scored a full 16 points healthier on the physical health index than people who said they didn't have a safe place to work out, Gallup found. And people who felt safe walking alone at night scored 9 points higher on the same health scale compared to those who didn't.

Democrats' outlook on life generally improved in 2012, while Republicans' life ratings declined — and at no point in the year did their attitudes diverge as much as they did in November. In the month that President Obama clinched his reelection, Republicans' score on the collective life evaluation index (which measures optimism regarding current life and anticipated future life situations) dropped to 40.3 from 47.0 in October, Gallup found. Democrats, meanwhile, became slightly more upbeat, with their score on the same scale climbing to 56.9 from 53.7 in October.

5. Middle-age could make you fat

For Americans, being middle-aged is the highest risk factor for being overweight, and this holds true even when controlling for ethnicity, race, marital status, gender, employment, income, education and region, according to Gallup. Being black is the second biggest risk factor for a high Body Mass Index (BMI), a measurement used to gauge how much fat a person is carrying around. [8 Reasons Our Waistlines Are Expanding]

6. Doctors seem to be practice what they preach

U.S. doctors have better health habits than other working adults, according to Gallup. Doctors are less likely to smoke, less likely to be obese, and more likely to say they exercised three or more days a week, compared with nurses and other employed adults as a whole, the polling group found this year.

Their better health is in part explained by their education — more highly educated Americans in general have better health habits. Nevertheless, the finding still suggests that physicians are setting a good example for their patients.

Workers are more likely to be engaged in their work and to report lower levels of stress when they use their strengths at work, according to Gallup. But many American employees feel like their talents are being wasted — 21 percent say they use their strengths for just three hours or fewer per day and they're more likely to report experiencing worry, stress, anger and sadness.

But these emotional burdens start vanishing when talents get put to use, Gallup found. Americans who say they use their strengths for 10 hours or more per day (about one in four do) report more happiness and energy and say they feel better-rested.

8. Stay-at-home moms are at risk of depression

Compared with employed moms, stay-at-home moms were more likely to tell Gallup pollsters that they experienced a lot of sadness and anger during the previous day. Women who don't have jobs for pay but stay at home with young children also are more likely to report having been diagnosed with depression at some point in their lives, while employed moms are about emotionally well-off as working women who don't have kids at home, Gallup officials said. These trends held true across age and income groups.

For the United States, 2012 is expected to rank as the warmest year ever on record. At the same time, Americans this year reported exercising more than ever. In each month this year (except for April), more Americans said they worked out on three or more days per week than did so in the same month for each of the past four years, Gallup found.

There's no evidence that the high temperatures and exercise uptick are directly linked. However, Americans' seasonal workout habits suggest it's not a coincidence. Americans tend to work out more in the spring and summer than the spring and fall, hinting that weather plays a big role in the likelihood of exercise.

10. Disengaged employees are more likely to come down with a case of the Mondays

Heading back to work after the weekend is easy for employees who like their jobs, but it's a much more jarring transition for those who don't. Gallup found that employees who are disengaged at work experience a significant slump in mood when going from weekends to weekdays. In another finding, actively engaged workers who are enthusiastic about their work are unfazed by long commute times, which otherwise can be a drag on happiness.