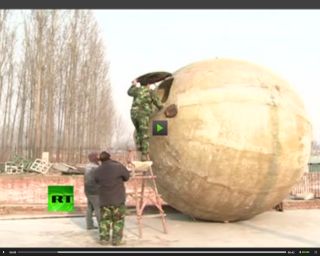 Having a tough time shopping for the survivalist on your holiday gift list? An entrepreneur in China has created the perfect stocking stuffer — if your stockings are the size of a one-car garage — a steel-and-fiberglass survival pod sturdy enough to weather any apocalypse.

Inspired by the movie "2012," which tells the tale of the Mayan doomsday that some people claim is scheduled for Dec. 21, farmer Liu Qiyuan designed and manufactured several spherical pods large enough to hold 14 people, according to RT.com. Each pod comes equipped with water, food and oxygen tanks; they even can be outfitted with seatbelts in case of rolling Earth tremors or tsunami waves.

Liu claims the pods are so well insulated that anyone could survive months of sub-freezing temperatures. But if a tsunami or other flooding event has you concerned, relax: The shape and structure of each pod will reportedly enable it to float "like a ping-pong ball," Liu said in an article on RT.com.

If you're interested in buying one of the $48,000 survival pods, act now — not because the end is nigh, or because they’re selling fast, but because apparently Liu desperately needs to pay back the loan he took out to build the pods. For reasons that escape him, not one pod has sold yet, and his yard in the Hebei province south of Beijing is dotted with several of the large round globes, according to RT.com.