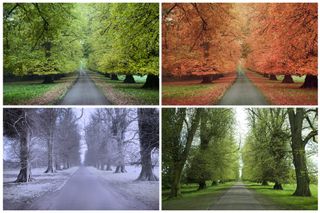 The four seasons vary significantly in characteristics, and can prompt changes in the world around them.
(Image: © Shelli Jensen | Shutterstock)

The passing of a year can bring a marked change in the weather and the surrounding environment. The four seasons — winter, spring, summer, autumn — can vary significantly in characteristics, and can prompt changes in the world around them. Let's take an overview of these four separate periods.

Attributes of the seasons may vary by location, but there are still broad definitions that cross most of the boundaries.

In the spring, seeds take root and vegetation begins to grow. The weather is warmer, and often wetter. Animals wake or return from warmer climates, often with newborns. Melting snow from the previous season, along with increased rainfall, can cause flooding along waterways, according to the Federal Emergency Management Agency (FEMA).

In the summer, temperatures may increase to their hottest of the year. If they spike too high, heat waves or droughts may cause trouble for people, animals, and plants. For example, in the summer of 2003, the high temperatures claimed more than 30,000 lives, according to Encyclopedia Britannica. Rainfall may increase in some areas, as well. Others may receive less water, and forest fires may become more frequent.

In the autumn, or fall, temperatures cool again. Plants may begin to grow dormant. Animals might prepare themselves for the upcoming cold weather, storing food or traveling to warmer regions. Various cultures have celebrated bountiful harvests with annual festivals. Thanksgiving is a good example. "Thanksgiving in the United States is a historical commemoration but it has a spiritual dimension strongly associated with homecoming and giving praise for what has been bestowed upon us," Cristina De Rossi, an anthropologist at Barnet and Southgate College in London, told Live Science.

Winter often brings a chill. Some areas may experience snow or ice, while others see only cold rain. Animals find ways to warm themselves, and may have changed their appearance to adapt. "In a similar way to the Autumnal theme, Winter festivals celebrate the return of the light during a time of deepest physical darkness," said De Rossi. The Indian festival of Diwali, for example, which takes place between October and November, celebrates the triumph of righteousness, and of light over darkness.

The timing and characteristics of the seasons depends upon the location on Earth. Regions near the equator experience fairly constant temperatures throughout the year, with balmy winters barely discernible from warm summers. This is because it gets fairly constant light from the sun, due to its position on the outer curve of the Earth, according to the Atmospheric Radiation Measurement (ARM) program.

For areas to the north and south, the seasons can change more significantly. People closer to the poles might experience icier, more frigid winters, while those closer to the equator might suffer hotter summers. Other factors can also affect the weather and temperature over the seasons; some areas experience dry summers as temperatures spike, while others might call summer their "wet season." A wet season is when the average precipitation of an area is 2.4 inches (60 millimeters) or more, according to the British Broadcasting Company (BBC). Mountainous regions might experience more snowfall than plains within the same latitude, while oceanfront property could see an increase in violent tropical storms as the weather shifts.

The time of year a region experiences a season depends on whether it is in the northern or southern hemisphere. The Southern Hemisphere experiences winter while its northern neighbors chart summer; the north sees the slow blossom of spring while the south brings in the autumn harvest.

Earth and the sun

The cycle of seasons is caused by Earth's tilt toward the sun. The planet rotates around an (invisible) axis. At different times during the year, the northern or southern axis is closer to the sun. During these times, the hemisphere tipped toward the star experiences summer, while the hemisphere tilted away from the sun experiences winter, according to the National Oceanic and Atmospheric Administration (NOAA).

At other locations in Earth's annual journey, the axis is not tilted toward or away from the sun. During these times of the year, the hemispheres experience spring and autumn.

Equinoxes are another significant day during Earth's journey around the Sun. On these days, the planet's axis is pointed parallel to the Sun, rather than toward or away from it. Day and night during the equinoxes are supposed to be close to equal. The spring, or vernal, equinox for the northern hemisphere takes place around March 20, the same day as the south's autumnal equinox. The vernal equinox in the southern hemisphere occurs around September 20, when people in the north celebrate the autumnal equinox. The vernal equinox marks the first day of astronomical spring for a hemisphere, while the autumnal equinox ushers in the first day of fall. [Infographic: Earth's Solstices & Equinoxes Explained]

But changes in the weather often precede these significant points. The meteorological seasons focus on these changes, fitting the seasons to the three months that best usher them in. December to February marks meteorological winter in the Northern Hemisphere and meteorological summer in the southern. March, April, and May are lauded as spring or autumn, depending on the location, while June through August are the months of summer for the north and winter for the south. September, October, and November conclude the cycle, ushering in fall in northern regions and spring in southern, according to NOAA.

The seasons can bring a wide variety to the year for those locations that experience them in full. The weather in each one may allow people to engage in activities that they cannot perform in others — skiing in the winter, swimming in the summer. Each season brings with it its own potential dangers, but also its own particular brand of beauty.