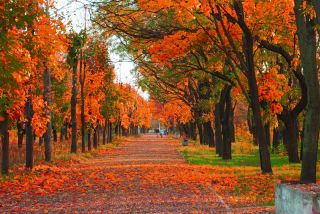 Sandwiched between blazing summer and chilly winter, autumn is the "cooling off" season. Nighttime arrives earlier, temperatures begin to drop and most vegetative growth decreases. Animals begin to prepare for the dearth of food that generally comes during the winter, gathering supplies or traveling to warmer climates.

The cycle of seasons is caused by Earth's tilt on its axis and the planet's orbit around the sun. When the axis points toward the sun, that hemisphere experiences summer. The hemisphere tilted away from the sun experiences winter. After Earth travels a quarter of the way around the sun, the axis is pointed along the planet's path, parallel to the star.

The exact moment when the sun appears to arrive at the intersection of the ecliptic and the celestial equator is when autumn begins. At Earth's equator, the sun is directly overhead at noon. These moments in time are called equinoxes, and the length of daylight and nighttime are approximately the same, according to the National Maritime Museum. The word "equinox is derived from two Latin words: aequus (equal) and nox (night).

Day and night are not exactly 12 hours each. Because of the way the sun's light refracts in Earth's atmosphere, we can actually see the sun for a few minutes before its disk rises and for a few minutes after it has truly set. Thus, daylight on any given day lasts roughly six or seven minutes longer than it seemingly should. [Earth's Equinoxes & Solstices (Infographic)]

The autumnal equinox is the beginning of "astronomical autumn," which ends with the start of winter. In the Northern Hemisphere, that is from around September 22 to about December 22, though it varies from year to year, according to the NOAA. In the Southern Hemisphere, the season runs from about March 20 to June 21.

Autumn brings a nip in the air. How much of a change is felt depends on the location of the area on Earth. Regions near the equator experience fairly constant temperatures throughout the year, while those farther north or south experience greater variations. This is because the equator gets a consistent amount of sun. Far northern and southern regions get less sun due to the curvature of the sun, according to the Atmospheric Radiation Measurement (ARM) program.

For the continental United States, temperatures during autumn (September through November) average 53.5 degrees Fahrenheit (11.9 Celsius), according to the NOAA — an 18-degree (10 degrees C) drop from average summer temperatures. Average autumn temperatures range from a high of 72.7 F (22.6 C) in Florida to a low of 26.7 F (minus 2.9 C) in Alaska.

Autumn, of course, is also known as fall, primarily in the United States. Ambivalence over the name of the third season of the year reflects its status as a relatively new concept, according to Natalie Wolchover in a 2012 article for Live Science. Many cultures only recognized two seasons, such winter and summer or winter and spring.

The period of transition between summer and winter came to be known as "harvest." "Autumn," a Latin word, first appeared in English in the late 14th century, and gradually gained on "harvest." In the 17th century, "fall" came into use, almost certainly as a poetic complement to "spring," according to "Folk Taxonomies in Early English" (Fairleigh Dickinson University Press, 2003) by Earl R. Anderson. [For more, see "Why Does Fall/Autumn Have Two Names?"]

Why do leaves change color?

In response to chilly temperatures and the changes in daylight, leaves stop producing green-tinted chlorophyll, which allows them to capture sunlight and make energy. Because chlorophyll is sensitive to the cold, certain weather conditions like early frosts will turn off production more quickly.

Meanwhile, orange and yellow pigments called carotenoids — also found in orange carrots — shine through the leaves' washed out green. The red color in some leaves comes from anthocyanins, which unlike carotenoids, are only produced in the fall, according to the State University of New York College of Environment. They also give color to strawberries, red apples, and plums.

But red leaves are also signal of distress. If you see leaves of a tree turning red early, in late August, the tree is most likely suffering from a fungus or perhaps a ding from a reckless driver.

Autumn is generally regarded as the end of the growing season. Also known as the harvest season, autumn ushers in a time of celebration for many farming cultures when they gathered in their crops.

"Autumn, or fall, is rich with different festivals which mainly celebrate the return of light, harvest, and, like spring, rebirth through death," Cristina De Rossi, an anthropologist at Barnet and Southgate College in London, told Live Science. For example, the harvest festival in the United Kingdom is a time when people give thanks for the fruits of the land and collect food to donate to those in need.

"Harvest celebrations tend to combine giving thanks with prayers for future abundance, to propitiate the god(s) and ensure successful crops," said De Rossi. Another example of this would be Thanksgiving, which is celebrated in the United States. It is a historical commemoration, but it has a spiritual dimension strongly associated with homecoming and giving praise for what has been bestowed upon us, explained De Rossi.

De Rossi also points out these celebrations as further examples of fall's ties with giving thanks and rebirth:

The season is often regarded as a melancholy time and has inspired many writers and poets. Here are some quotes about autumn:

"Autumn is a second spring when every leaf is a flower." — Albert Camus

"Delicious autumn! My very soul is wedded to it, and if I were a bird I would fly about the earth seeking successive autumns." — George Eliot

"Every leaf speaks bliss to me, fluttering from the autumn tree." — Emily Bronte

"Now Autumn's fire burns slowly along the woods and day by day the dead leaves fall and melt." — William Allingham

"Autumn in New York, why does it seem so inviting?" — Vernon Duke

"Summer ends, and autumn comes, and he who would have it otherwise would have high tide always and a full moon every night." — Hal Borland

"Autumn is the mellower season, and what we lose in flowers we more than gain in fruits." — Samuel Butler

"Autumn is as joyful and sweet as an untimely end." — Remy de Gourmont