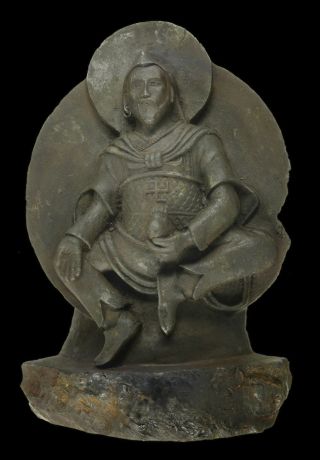 A Buddha statue dating back to the 8th to 10th centuries is carved from a rare iron meteorite.
(Image: © Elmar Buchner)

Researchers who reported that a potentially ancient Buddha statue is carved from a meteorite said they are not surprised that an expert in Buddhist history believes the statue to be a fake.

"Honestly, that is what we expected," said Elmar Buchner, who along with his colleague reported on the statue in September in the journal Meteoritics & Planetary Science. "We heard so many opinions from so many experts in art history and experts for Buddhism on the origins and the age of the statue prior to and after the publication."

The most public of these consultations is a new report from Achim Bayer, a Buddhism expert at Dongguk University in South Korea. In a report released online, Bayer writes that the features of the statue are "pseudo-Tibetan" and are more likely to be a European reproduction dating from 1910 to 1970 than a true ancient carving dating back 1,000 years, as Buchner and his colleagues had estimated.

"The non-Asian features of the 'lama wearing trousers' should be immediately obvious to any scholar in the field," Bayer wrote, referring to the statue as a "lama" or guru. The shoes, pants and sleeves of the man's garments are all wrong for ancient Tibet, he wrote. The statue's hands, eyes and ears are also shaped unusually for Tibetan art, he said.

The statue was said to have come to Germany in the possession of a pre-World War II scientific expedition commissioned by the Nazi party. Bayer called that into question, too, saying there is no documentation of the statue's transfer and arguing that it is more likely a fake created in the 20th century for the antique or Nazi-memorabilia market.

"For us, Bayer's hypothesis is just one opinion," Buchner wrote in an email to LiveScience. "However, we cannot decide whether this hypothesis is valid or not because we are not the experts in art history, and we told the press that our assumptions are speculative, accordingly," wrote Buchner, who is a geologist.

The geochemical analysis of the meteorite is still sound, Buchner said. The team found that the material used to make the statue is a rare type of iron- and nickel-rich meteorite from a meteorite fall along the Siberian-Tibetan border. [Top 5 Weirdest Meteorites]

That cosmic origin brings up one more mystery in the tale of the controversial space Buddha.

"I think it is not convincing that anybody took a very precious meteorite to produce a reproduction for the local antique market!?" Buchner wrote.