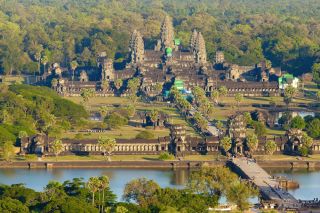 Built between roughly A.D. 1113 and 1150, and encompassing an area of about 500 acres (200 hectares), Angkor Wat is one of the largest religious monuments ever constructed. Its name means "temple city."

Originally built as a Hindu temple dedicated to the god Vishnu, it was converted into a Buddhist temple in the 14th century, and statues of Buddha were added to its already rich artwork. Sometime later it was turned into a military fortification. Today it is a UNESCO World Heritage Site that scientists are struggling to preserve.

Its 213-foot-tall (65 meters) central tower is surrounded by four smaller towers and a series of enclosure walls, a layout that recreates the image of Mount Meru, a legendary place in Hindu mythology that is said to lie beyond the Himalayas and be the home of the gods.

Within the largest city in the world

The city where the temple was built, Angkor, is located in modern-day Cambodia and was once the capital of the Khmer Empire. This city contains hundreds of temples. The population may have been over 1 million people. It was easily the largest city in the world until the Industrial Revolution.

Angkor had an urban core that could easily have held 500,000 people and a vast hinterland that had many more inhabitants airborne laser scanning (lidar) research has shown. Researchers have also identified a "lost" city called Mahendraparvata, which is located about 25 miles (40 kilometers) north of Angkor Wat.

Angkor Wat itself is surrounded by a 650-foot-wide (200 m) moat that encompasses a perimeter of more than 3 miles (5 km). This moat is 13 feet deep (4 m) and would have helped stabilize the temple's foundation, preventing groundwater from rising too high or falling too low.

Angkor Wat's main entrance was to the west (a direction associated with Vishnu) across a stone causeway, with guardian lions marking the way. Recently, archaeologists found the remains of eight towers made of sandstone and laterite by the western gateway. These towers may be the remains of shrines that were in use before Angkor Wat was fully constructed. To the east of the temple was a second, more modest, entrance.

The heart of the temple was the central tower, entered by way of a steep staircase, a statue of Vishnu at top. This tower "was at once the symbolic center of the nation and the actual center where secular and sacred power joined forces," writes researcher Eleanor Mannikka in the book "Angkor: Celestial Temples of the Khmer Empire" (Abbeville Press, 2002). "From that unparalleled space, Vishnu and the king ruled over the Khmer people."

Hidden paintings have been discovered in the central tower. One chamber in the tower has a scene showing a traditional Khmer ensemble of musical instruments known as the pinpeat, which is made up of different gongs, xylophones, wind instruments and other percussion instruments. In the same chamber, there's also an intricate scene featuring people riding horses between two structures, which might be temples. These two paintings are among 200 that have been discovered in Angkor Wat since 2010.

A mile long sand structure containing a variety of spiral designs was recently discovered beside Angkor Wat by archaeologists using lidar. It would have existed for a brief period during the mid-to-late 12th century. Archaeologists are not certain what it was used for, and it's possible that the structure was never completed.

The remains of homes and ponds used by workers who lived near Angkor Wat, and serviced the temple, were also found recently during lidar research.

Vishnu and the king

The builder of Angkor Wat was a king named Suryavarman II. A usurper, he came to power in his teenage years by killing his great uncle, Dharanindravarman I, while he was riding an elephant. An inscription says that Suryavarman killed the man "as Garuda [a mythical bird] on a mountain ledge would kill a serpent."

Suryavarman's bloodlust would continue into his rule; he launched attacks into Vietnam in an effort to gain control over the territory. He also made peaceful diplomatic advances, re-opening relations with China.

He venerated the god Vishnu, a deity often depicted as a protector, and installed a statue of the god in Angkor Wat's central tower. This devotion can also be seen in one of the most remarkable reliefs at Angkor Wat, located in the southeast of the temple. The relief shows a chapter in the Hindu story of creation known as the "churning of the sea of milk."

As archaeologist Michael Coe writes, the relief "describes how the devas (gods) and the asuras (demons) churned the ocean under the aegis of Vishnu, to produce the divine elixir of immortality," ("Angkor and the Khmer Civilization," Thames & Hudson, 2003). Scholars consider this relief to be one of the finest art pieces at Angkor Wat.

Suryavarman's devotion to Vishnu is also shown in the posthumous name he was given, "Paramavishnuloka" which, according to researcher Hélène Legendre-De Koninck, means "he who is in the supreme abode of Vishnu." ("Angkor Wat: A Royal Temple," VDG, 2001).

Building Angkor Wat was an enormous undertaking that involved quarrying, careful artistic work and lots of digging. To create the moat around the temple, 1.5 million cubic meters (53 million cubic feet) of sand and silt were moved, a task that would have required thousands of people working at one time.

The buildings at Angkor Wat posed their own challenges. To support them a tough material called laterite was used, which in turn was encased with softer sandstone that was used for carving the reliefs. These sandstone blocks were quarried at the Kulen Hills, about 18 miles (30 km) to the north. A series of canals were used to transport the blocks to Angkor Wat, research shows.

Beneath the central tower was a shaft that leads to a chamber where, in 1934, archaeologists found "two pieces of crystal and two gold leaves far beneath where the Vishnu statue must have been," Coe writes, adding that deposits like these "spiritually 'energized' a temple, much as a battery will provide power to a portable electronic device."

Although Angkor Wat is dedicated to Vishnu, the full purpose of the temple is still debated. One question is whether the ashes of Suryavarman II were interred in the monument, perhaps in the same chamber where the deposits were found. If that were the case it would give the temple a funerary meaning.

Eleanor Mannikka has noted that Angkor Wat is located at 13.41 degrees north in latitude and that the north-south axis of the central tower's chamber is 13.43 cubits long. This, Mannikka believes, is not an accident. "In the central sanctuary, Vishnu is not only placed at the latitude of Angkor Wat, he is also placed along the axis of the earth," she writes, pointing out that the Khmer knew the Earth was round.

In addition, in her writing, Mannikka notes a dozen lunar alignments with Angkor Wat's towers, suggesting that it served an important astronomical role. "During the long and clear Cambodian nights, when the stars filled every inch of the black sky, the astronomer-priests stood on the long western causeway ... and recorded the movements of the moon against the towers in the top two galleries of the temple."