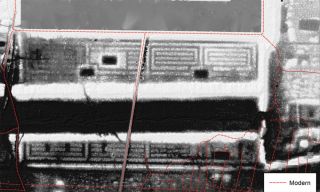 Eight buried towers and the remains of a massive spiral structure created from sand have been discovered at Angkor Wat in Cambodia.

The massive structure — almost a mile long — contains a spiral design, with several rectangular spirals that form a giant structure, archaeologists say. "This structure, which has dimensions of more than 1,500 m × 600 m (about 1 mile by 1,970 feet) is the most striking discovery associated with Angkor Wat to date. Its function remains unknown and, as yet, it has no known equivalent in the Angkorian world," Roland Fletcher, a University of Sydney professor, said in a statement put out by the university.

Today, the spiral structure is hard to make out on the ground, having been obscured by modern features and vegetation.

By examining the mile-long spiral structure and the stone towers, researchers date them back to when Angkor Wat was first built in the 12th century A.D. [See Photos of the Spiral Structure and Buried Towers at Angkor Wat]

King Suryavarman II had Angkor Wat built as a Hindu temple to the god Vishnu. The temple has a 213-foot-tall (65 meters) central tower that is surrounded by four smaller towers and a series of enclosure walls. The layout "is considered to correspond with the cosmology of Mount Meru and the surrounding Sea of Milk from which ambrosia was churned by the gods and demons," wrote a research team in an article published this month in the journal Antiquity.

The spiral structure is difficult to make out from the ground, and archaeologists found it using LiDAR — a laser-scanning technology that allows scientists to detect structures obscured by vegetation or modern development.

When surveyed on the ground the structure turned out to be made of "archaeologically sterile banks of sand," meaning it contained no artifacts from the past, wrote archaeologists Damian Evans, a researcher with École française d'Extrême-Orient, and Roland Fletcher in an Antiquity article.

"Quite how the spirals functioned is not at all clear," Evans and Fletcher wrote. One possibility is that it is a garden that provided the temple with produce for rituals and eating, the spiral patterns possibly having a spiritual significance.

Evans and Fletcher found that the spiral structure was not in use for long. A canal that cut through the spiral design was built later in the 12th century.

"The spiral features would only have been functional for a brief period during the mid-to-late twelfth century A.D.," Evans and Fletcher wrote. They say that it's possible the spiral structure was never completed.

Another discovery, made using ground-penetrating radar and archaeological excavation, are the remains of what appear to be eight demolished towers constructed out of sandstone and laterite (a type of rock). They were found on the western side of Angkor Wat beside a gateway across the moat.

The dating is not entirely clear but it appears that many of the towers were created during the early-to-mid 12th century when Angkor Wat was being constructed.

Archaeologists found that some of the towers form a series of squares that may have supported one or more structures. They also found that many of the towers were constructed before the gateway wall.

They theorize that the towers could have supported a shrine that was in use while construction of Angkor Wat was underway.

"The configuration of the buried 'towers' contains the unique possibility that a shrine was built on the western side of the Angkor Wat platform during the period when the main temple was being constructed," a research team wrote in an article published in Antiquity.

Once the main temple was constructed and work on the gateway across the western moat began, the shrine could have been torn down, researchers say.

Archaeologists uncovered several other secrets of Angkor Wat. For instance, the LiDAR survey revealed the remains of homes and ponds that would have been used by workers who serviced the temple.

Additionally, researchers found that later in Angkor Wat's history — after it had been converted to a Buddhist temple — the site was turned into a military fortification with wooden structures being built to defend the moated site.

"Angkor Wat is the first and only known example of an Angkorian temple being systematically modified for use in a defensive capacity," Fletcher said. The fortification of it was "one of the last major constructions at Angkor and is perhaps indicative of its end."