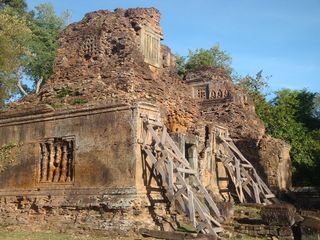 A monument in Angkor is collapsing due to decay.
(Image: © F. Chen from the Institute of Remote Sensing and Digital Earth, Chinese Academy of Sciences)

Cambodia's ancient stone city of Angkor is a remnant of the Khmer Empire, dating between the 9th and 15th centuries. But even stone crumbles over time, and scientists are investigating what may have led to significant degradation of the remains of Angkor's elaborate architecture.

For the first time, researchers are using radar scans together with high-resolution satellite imagery to explore how changes in groundwater — water stored in underground reserves — at the Angkor site may have caused shifts on the surface that affected the ancient buildings.

Damage is widespread in Angkor's monuments, marked by collapses, cracks and fissures in many locations. Understanding what might be weakening these structures could help experts find more effective methods for preserving and protecting ancient buildings — in Angkor and at other sites of historic importance around the world. [In Photos: Stunning Discoveries at Angkor Wat]

Erosion and growing trees that force their way into cracks have been recognized as causes of monument damage, but little is known about how demands on Angkor's groundwater may be affecting the buildings — and the impacts could be significant, scientists wrote in a new study.

The power of water

Water needs for Angkor, its resident communities and its 3 million annual visitors — up from 10,000 visitors in 1993 — have skyrocketed in recent decades, and the study authors questioned whether wells and pumps that are drawing more heavily on the region's groundwater could be weakening the integrity of the stone structures and contributing to Angkor's deterioration.

To monitor subtle deformations at the millimeter scale over large expanses of land around Angkor, the researchers turned to a type of radar called synthetic aperture radar interferometry (InSAR). They searched for evidence of movement in the monuments and in land surface in an area measuring 14 miles (22 kilometers) by 11 miles (18 km), applying readings to 45 scenes of satellite imaging.

Over a two-year period — from 2011 to 2013 — the scientists found no direct evidence linking groundwater pumping to monument damage or to an increase in instability. However, incremental changes in groundwater spanning decades could contribute to Angkor's current susceptibility to damage, the authors wrote in the study. And computer models hinted that a combination of factors working together — such as ongoing erosion of the stone architecture alongside seasonal shifts in the ground surface due to changes in the water table — could amplify known causes of degradation and increase the likelihood of collapse.

Perhaps the most significant result of the InSAR scans was demonstrating their usefulness as a unique tool for safeguarding Angkor monuments — an early warning system for tracking structures that might be vulnerable to decay, the study authors reported.

Traditional conservation methods at Angkor typically relied upon observations and measurements that indicated when a structure was already damaged and susceptible to collapse. However, the new technique could detect minuscule shifts that are likely to trigger damage. By spotting them before the damage happens, InSAR could help experts act to protect vulnerable structures and perhaps prevent the stone from weakening in the first place.

More environmentally conscious conservation methods may be required to stem the tide of Angkor's decay, the study authors concluded. Moving forward, multidisciplinary analysis including geology, hydrology, remote sensing and anthropology could provide a more promising approach for preserving Angkor's historic buildings, lead author Fulong Chen, a researcher with the Institute of Remote Sensing and Digital Earth at the Chinese Academy of Sciences in Beijing, China, told Live Science in an email.

The findings were published online today (March 1) in the journal Science Advances.