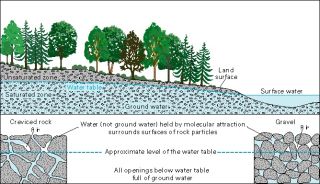 In this diagram, the ground below the water table (the blue area) is saturated with water. The "unsaturated zone" above the water table (the greenish area) still contains water, but it is not totally saturated with water. The two drawings at the bottom of the diagram show a close-up of how water is stored in between underground rock particles.
(Image: © USGS.)

Few natural resources are as important, or as invisible, as groundwater. Even though it exists almost everywhere around the world, few people understand what groundwater is, or how critical these vast reservoirs of underground water are to modern life.

"Groundwater is any water that lies in aquifers beneath the land surface," said Steven Phillips, a hydrologist with the U.S. Geological Survey in Sacramento, California. While some of the water that falls as precipitation is channeled into streams or lakes, and some is used by plants or evaporates back into the atmosphere, most of it seeps underground.

The oceans contain about 97 percent of the Earth's water, but that, of course, isn't drinkable. About 2 percent is frozen at the poles or in glaciers. Of the remaining 1 percent, almost all of it — about 96 percent — is groundwater, according to the National Oceanic and Atmospheric Administration (NOAA). The rest of our freshwater is found at the surface in streams, lakes, rivers and wetlands.

Groundwater may be near the Earth's surface or as deep as 30,000 feet, according to the U.S. Geological Survey (USGS). An area's "water table" is the level beneath the surface where water-saturated soil and rock is found; above the level of the water table is unsaturated soil — even though that soil is damp, it also contains air.

Because it's impossible to see and difficult to measure, there are a number of myths associated with groundwater. It's widely believed, for example, that groundwater flows like an underground river: Though there are a handful of places with large underground gaps where water can flow rapidly, these are very rare.

Groundwater does move, however, and it usually flows downward through the force of gravity because most natural replenishment takes place in the mountains, Phillips said. Depending on the density of the rock and soil through which groundwater moves, it can creep along as slowly as a few centimeters in a century, according to Environment Canada. In other areas, where the rock and soil are looser and more permeable, groundwater can move several feet in a day.

More porous rock, such as limestone, sandstone and gravel, has innumerable small spaces that can hold water. Some of the world's largest aquifers — vast underground reservoirs of groundwater — are found in regions with these porous bedrocks.

Groundwater can also be found in regions where the bedrock is made of denser material — such as granite or basalt — if that bedrock has been cracked or shattered. Dense, impermeable material like clay or shale can act as an "aquitard," i.e., a layer of rock or other material that is almost impenetrable to water, Phillips said. Through water might move through such material, it will do so very slowly (if at all).

When an aquifer is confined beneath an aquitard layer, the pressure on the groundwater can be enough to force the water out of any well that's drilled into that aquifer. Such wells are known as artesian wells.

Groundwater can be trapped beneath the Earth's surface for millions of years. Tests on ancient groundwater dripping from fractures in a deep mine revealed the liquid to be between 1.1 to 2.7 billion years old.

While surface water quality varies due to erosion, runoff, pollution, plant matter, animal waste and other possible contaminants, groundwater quality is generally more stable. And because it usually moves slowly through rock, groundwater is filtered of many contaminants, including some bacteria and viruses. These factors make groundwater an important drinking water resource.

This does not mean, however, that groundwater can't be contaminated: There are many cases worldwide where important groundwater resources (and drinking water supplies) have been ruined by saltwater intrusion (a particular problem in coastal areas), biological contaminants such as manure or septic tank discharge, and industrial chemicals such as pesticides or petroleum products. And once groundwater is contaminated, it's notoriously difficult to remediate.

In addition to concerns about groundwater quality, the overall volume of groundwater in aquifers is also a serious environmental issue. Groundwater is a finite resource, and even large aquifers can be drained of much of their water, especially during droughts, when aquifers aren't recharged by precipitation.

"We're seeing substantial loss of storage in the Central Valley aquifer in California," Phillips said. "It's gone from being a lake in the southern San Joaquin Valley to a place where the water table is 500 feet [152 m] below the surface."

Excessive pumping of groundwater can result in a lowering of the water table; in severe cases, where pumping demand is high and aquifer recharge is slow, the water table can drop so low that it's below the depth of a well. When that happens, the well "runs dry" and no water can be removed until the groundwater is recharged — which, in some cases, can take hundreds or thousands of years. Lowering the water table also decreases the water flow into lakes, rivers and streams.

"Groundwater is an important ecological resource to critters as well as us, and we've already had serious problems in many areas where big sources of water for wildlife — waterfowl in particular — have dried up," Phillips said.

The importance of preserving groundwater resources is underscored by the number of places that depend on groundwater for drinking water, industrial uses and other needs. Texas gets almost 60 percent of its water from groundwater; in Florida, groundwater supplies more than 90 percent of the state's fresh water. California's farming-centric Central Valley accounts for 20 percent of all of nation's groundwater withdrawals, according to the USGS.

But in these states and many others, groundwater resources are threatened by competing interests, from agriculture and mining to private residences with drinking water wells on the property.

For example, the Ogallala Aquifer — a vast, 174,000 square-mile (450,000 square kilometers) groundwater reservoir — lies beneath the Great Plains, stretching from South Dakota to Texas. The Ogallala supplies almost one-third of America's agricultural groundwater, but by 2010, about 30 percent of the aquifer's groundwater had been tapped.

Parts of the Ogallala Aquifer are now dry, and the water table has declined more than 300 feet in other areas, according to the Texas Water Development Board. Not only do these groundwater losses have serious implications for agricultural production and the regional economy, they may also have a significant and immediate effect on the more than 1.8 million people who rely on the Ogallala Aquifer for their drinking water.

"Although there is still a lot of groundwater deep down, it gets saltier and saltier the farther you go," Phillips said.