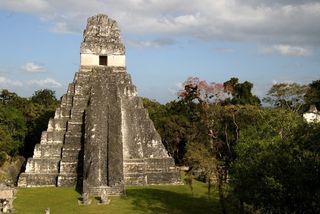 A temple in Tikal, one of the Maya city states.
(Image: © Zap Ichigo, Shutterstock)

The ancient Maya city of Tikal, in modern-day Guatemala, flourished between roughly 600 B.C. and A.D. 900. Starting out as a modest series of hamlets, it would become a great Maya city-state with more than two dozen major pyramids.

Tikal is a recent Maya name that means “at the waterhole.” It was named this long after its collapse. Today, Tikal is one of the largest archaeological sites in Central America and is encompassed by Tikal National Park.

At its peak in the Late Classic period (A.D. 682-909) the city was spread over 50 square miles (130 square km), its population estimated to be as high as 100,000 people, external trade helping fuel its growth. Recent research reveals that the city’s inhabitants created a sophisticated water management system to see it through periods when it didn’t have any rain.

Like other Maya cities, its people used a system of glyptic writing inscribed both on stone and on a perishable material made from the bark of trees (most of which have not survived). Scholars have been able to decipher the writing and, along with the city’s archaeological remains, have been able to reconstruct much of Tikal’s past.

Throughout much of its history, Tikal was influenced, and for a time possibly even controlled, by the city of Teotihuacan, an urban center located in central Mexico more than 600 miles (1,000 km) away. Maya writing refers to the city using a glyph that translates as “cattail reed,” and artistic motifs from Teotihuacan, such as depictions of the rain god Tlaloc, can be found at Tikal.

One notable example of Teotihuacan’s influence occurred on Sept. 13, A.D. 379, when a ruler named Siyaj K’ak is recorded to have ascended at Tikal. He is depicted wearing feathers and shells and holding an atlatl (spear-thrower), features associated with Teotihuacan, writes researcher John Montgomery in his book "Tikal: An Illustrated History of the Mayan Capital" (Hippocrene Books, 2001).

The ambitious pyramid construction projects were driven in part by the famous Mayan calendar. Starting at least as early as A.D. 672 the city’s rulers would construct a twin pyramid complex at the end of every K’atun (20-year period). Each of these pyramids would be flat-topped, built adjacent to each other and contain a staircase on each side. Between the pyramids was a plaza that had structures laid out to the north and south.

One early example of this complex was built by the ruler Ah Cacau. “On the south side is a building with nine doorways; on the north, a walled enclosure containing a stela and altar,” writes archaeologist Robert Sharer in his book "The Ancient Maya" (Stanford University Press, 1994). So far, nine of these twin pyramid complexes have been found at Tikal; construction of them appears to have continued until close to the city’s end.

In addition to the twin pyramids, Tikal’s rulers also built six “temple” pyramids, structures that often marked the burial place of a ruler. Two of them, known today as Temples I and II, face each other at the center of the city, Tikal’s grand plaza located between them.

Temple I is located to the east and rises 145 feet (44 meters) off the ground. A stairway goes up over a series of nine step layers, taking the visitor to an enclosed room at top that has images of the ruler it was built for, Jasaw Kaan K’awil. He was a king who led Tikal’s forces in defeating its most bitter enemy — the rival city of Calakmul. His burial chamber was found inside the pyramid’s interior and contained many luxury goods, including jaguar pelts, jade and even “delicately incised images of figures in canoes on human bones,” writes Heather Irene McKillop in her book "The Ancient Maya: New Perspectives" (ABC-CLIO, 2004).

The pyramid beside Jasaw Kaan K’awil’s, known today at Temple II, is believed to be dedicated  to the ruler’s wife, Lady Tun Kaywak. She is said to have been from the city of Yaxhá about 19 miles (30 km) southeast of Tikal. The marriage of her to K’awil cemented a political alliance. Her pyramid rises up 125 feet (38 meters) and contains three step layers. At a doorway on top, an image of woman, believed to be her, is carved on wood. “Lady Tun Kaywak wears embroidered stoles and an elaborate Sun God bonnet, her image now badly eroded and worm-eaten,” writes John Montgomery.

Just to the north of these two temples is an area known to archaeologists as the “North Acropolis.” From the city’s earliest beginnings, it was used for burying Tikal’s elite, its rulers in particular. It contains a complex series of temples, shrines and tombs that have been rebuilt and expanded many times throughout the city’s history. They cover more than two and a half acres (1 hectare).

To the south of Temples I and II lies the city’s palace, also known as the Central Acropolis. Like the North Acropolis it was expanded on and modified over time.

It was in use at least as early as the reign of Chak Tok Ich’aak I, who ruled around A.D. 375. His palace, a relatively modest structure, contained stairways on the east and west and stone benches, which he would have sat on to conduct business, no doubt with animal pelts to make himself more comfortable.

As time went on, the palace expanded into a full-fledged complex with half a dozen courtyards and a water reservoir to the south. Again the fondness for pyramids shows. At the southern end of the complex is a “five-story palace” that “imparted a terraced, pyramidal effect,” Montgomery writes, a series of staircases helped visitors navigate the structure.

On the east side of the complex a “reviewing stand” was set up that overlooked a ball court. Played with a rubber ball, the exact rules of the game are unknown but the ruler and his family would have had a front-row seat.

Construction of the earliest pyramid at Tikal began about 2,000 years ago, and it was modified continually until the fourth century A.D., when it stood about 98 feet (30 meters) off the ground. It is known today by archaeologists as Mundo Perdido, or the “Lost World” complex, and is located southwest of Temples I and II. A series of burials located nearby indicates that it was used as the final resting place for some elite members of Tikal society.

Tikal, along with much of the Maya world, collapsed around A.D. 900, although some cities, such as Chichen Itza about 250 miles (400 km) north of Tikal, continued to flourish for centuries. The reason for the collapse is a matter of debate. Evidence suggests that drought and the use of sea routes for trade (bypassing overland routes) contributed to the decline.

Deforestation, which occurred over time as Tikal grew, may have added to this problem, reducing rainfall and making it harder to grow crops. Ironically, after the people left, it was the jungle that would retake the city, covering its many pyramids with vegetation.