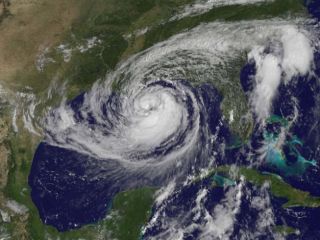 Hurricane Isaac is barreling toward U.S. shores, bringing an onslaught of roaring winds, dangerous storm surges and punishing downpours to the Gulf Coast.

But the storm's effects won't stop there. Hurricane Isaacis projected to bring rain to a huge portion of the United States far from the Gulf Coast. And at a time when the nation's agricultural hub is in the grip of a devastating drought, the sudden rains may not prove to be much of a blessing.

As Isaac's projected path takes it marching  inland, it will run into a cold front dropping down from Canada, which will set the stage for downpours across the Midwest and Mid-Atlantic states, said Frank Pereira, a meteorologist with the National Weather Service's Hydrometeorological Prediction Center.

All that moisture in Hurricane Isaac "is going to get stretched out along that cold front and will produce very heavy rains from southeastern Missouri into Ohio, and as far east as western Pennsylvania," Pereira told OurAmazingPlanet.

A swath that cuts across Arkansas, Missouri, Illinois and Indiana is expected get the most rain — up to 6 inches (15 centimeters) in some areas.

"Hopefully these will be beneficial rains for these folks, because this includes part of the country that's been under very dry conditions for a better part of the year," Pereira said.

The added moisture could prove a huge help to the region's shriveled pastures.

But for the region's crops?  "It's too late," said Brad Rippey, an agricultural meteorologist with the U.S. Department of Agriculture.

About two-thirds of the United States is experiencing a drought, and for the nation's crop producers, the parched conditions have been disastrous, Rippey told OurAmazingPlanet.

The coming rains offer no hope for corn and little hope for soybeans, he said, because the growing season is largely over.

"It's kind of a double-edged sword," Rippey explained. "They desperately need the moisture, but at this point in the season, it's not necessarily a good thing to have a lot of rain."

Bob Nielsen, an agronomist at Purdue University and a 30-year veteran of agricultural research, agreed.

"It would be nice to get a couple inches out of it, but if we get a lot of rain, it could lead to flooding of lowlands and further damage crops," Nielsen said.

In addition, a sudden dousing could promote disease and mold in the crops that have survived the drought, Rippey said.

However, both Rippey and Nielsen said Isaac's drenching rains might not be all bad.

"If it would help recharge the soil moisture levels, you bet it would have a benefit, and we would welcome it," Nielsen said.

Rippey said it's likely the rains would indeed boost soil moisture and also replenish the water table, which could prove a boon to next year's crops.

"There's not an immediate benefit, but we need to get that moisture back in there sometime," Rippey said. [10 Driest Places on Earth]

The prospect of better yields next year does little to ease the heartache this year's drought has brought, Nielsen said.