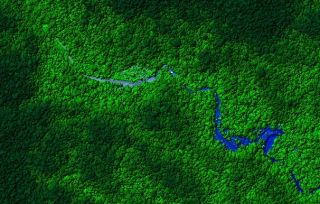 View of Honduras rainforest. Laser mapping scientists flew over a remote part of the forest and discovered what appear to be ruins. The next step is to visit the ruins in person to determine their age.
(Image: © The University of Houston and the National Science Foundation's National Center for Airborne Laser Mapping)

Underneath the thick, virgin rainforest cover in the Mosquitia region of Honduras, archaeologists have discovered ruins they think may be the lost city of Ciudad Blanca. Legends say the "White City" is full of gold, which is why conquistador Hernando Cortes was among the first Ciudad Blanca seekers in the 1500s. But the method the modern researchers used was a little different from previous explorers' techniques. The modern-day researchers flew over the area in a small plane and shot billions of laser pulses at the ground, creating a 3D digital map of the topology underneath the trees.

This is one of the first times this technique, called light detection and ranging (LiDAR), has been used to map ancient ruins. Beyond archaeology, LiDAR researchers at the National Science Foundation are looking to develop the technology for mapping disasters using drones, for military spying and for tracking erosion under rivers and shallow parts of the ocean.

Before LiDAR improved enough for their work, archaeologists discovered ruins the old-fashioned way — by hacking through forests using machetes. LiDAR is faster and cheaper. It's been gaining ground since 2009, when a U.S. archaeology team working on Mayan ruins first used the technology to peer beneath 80 square miles (207 square kilometers) of forest canopy in Belize. After four days of laser scanning, team members discovered buildings and agricultural fields they hadn't found in 25 years of study. The team was supported by the then-newly-created National Science Foundation organization for LiDAR science, the National Center for Airborne Laser Mapping. [10 Modern Tools for Indiana Jones]

Airborne LiDAR works by sending more than 100,000 short laser pulses to the ground every second while a plane flies over the area of interest. The laser light hits the ground, then returns to the aircraft. The time it takes for the light to make the back-and-forth trip tells researchers the altitude of points on the ground.

The technology is able to detect height differences of less than 4 inches (10 centimeters) and maps to GPS coordinates within 4 to 8 inches (10 to 20 centimeters). "It's within a step, in many cases," said Bill Carter, University of Houston engineer who develops LiDAR systems for the National Science Foundation.

The Belize archaeology work and the new Honduras findings both used the National Center for Airborne Laser Mapping's LiDAR system. There was one major difference between the two projects, however. At the Belize site, researchers thought it was likely there would be new ruins there. They used the LiDAR to scan regions surrounding structures they had already uncovered. On the other hand, in the new study in Honduras, researchers were running on just a hunch — and plenty of private funding.

Cinematographer Steven Elkins has been fascinated with the Ciudad Blanca stories for more than a decade. He previously analyzed satellite imagery of the Mosquitia forest, looking for signs of the city. As LiDAR improved, he gathered private investors to pay for the National Science Foundation's laser mapping center to analyze three areas he thought were especially promising. Elkins had originally approached the Honduran government with his idea, but government officials said they knew the forest well and there wasn't anything there, Carter said.

Over several days, National Science Foundation engineers flew over about 60 square miles (160 square kilometers) of forest for Elkins in their dual-engine Cessna planes. At the end of every day, they sent the data to Carter, who was working out of West Virginia. Carter found the first signs of what appeared to be human-made structures within five minutes of analyzing the data, he said. [Archaeology's Tech Revolution Since Indiana Jones]

"I'm the only person right now on the planet that knows that there's these ruins," Carter recalled thinking when he saw what he said were straight lines and right angles that don't normally appear in nature. "My wife walked in and looked over my shoulder and she was the second person to know."

Carter sent his analysis back to the archaeologists in Honduras, who agreed the structures were man-made. Now, Elkins, along with a team of Honduran scientists, will visit the structures in person and determine what they are and how old they are. The LiDAR coordinates will help them pinpoint exactly where to look in the thick jungle.

LiDAR for biology, disasters and the military

Carter said he found his involvement in discovering the Honduras ruins exciting, but the National Science Foundation's LiDAR center is looking to do much more with the technology.

So far, center researchers have used LiDAR to map to the ground to assess flooding risk and to find new fault lines in California. They've pinged Floridian citrus groves with lasers to check on the trees' health. Healthy tree leaves reflect a different quality of light back to LiDAR sensors than do sick trees, Carter explained.

The science agency also recently developed a laser that uses green light, which is able to map features underneath shallow water. Biologists want to use this technology to investigate fish spawning grounds, Carter said, while land managers may use a water-LiDAR to keep an eye on erosion.

In the future, the center hopes to develop smaller, lighter, less expensive LiDAR that is able to ride in unmanned robotic aircraft. The drones could spy for the military, go on a tough Arctic mapping expedition or assess conditions after disasters, such as earthquakes or hurricanes.

"As we look in the future, we see the ability to use these types of systems to map the entire Earth," Carter told InnovationNewsDaily. "Certainly all the land areas and shallow coasts."