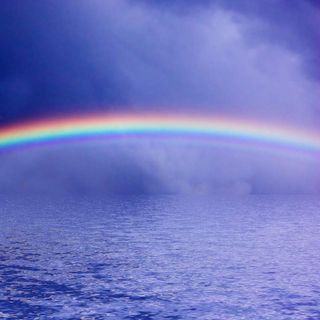 The Enduring Mystery of Light

Scientists have worked out how to bring beams of light to a screeching halt inside a material that would separate the light into its constituent colors, creating a rainbow—a trapped rainbow.

To bring light to a stop from its usual approximately 670 million mph (1.08 billion km/h) pace is no easy feat, and scientists have been working on the problem for years in hopes of revolutionizing how information is stored and sent.

To tackle the challenge, physicist Ortwin Hess of the University of Surrey and his colleagues have devised a theoretical means to stop light using what are known as metamaterials, or materials whose properties depend on their structure and not the composition of the material.

The property of these materials that makes them ideal for stopping light is their "negative refractive index." The refractive index of a medium is a measure of how much light slows down and reorients or bends as it passes through the medium. Most materials, such as glass and water, have a positive refractive index—light keeps moving in basically the same direction.

The negative refractive index of metamaterials (created by arranging tiny metallic inclusions in a transparent material) causes the light to bend somewhat back on itself and in such a way that "it gets slower and slower and eventually stops," Hess explained. (These same materials have been used to create an "invisibility cloak.")

The apparatus envisioned by Hess and his team, and detailed in the Nov. 15 issue of the journal Nature, would sandwich this metamaterial between two normal materials, with the metamaterial wider on one end and narrower on the other. These varying widths would cause the different wavelengths of light to stop at different points, so that "when every frequency component is trapped, they're spatially separated," Hess told LiveScience, in effect creating a rainbow of colors across the metamaterial.

Hess's scheme isn't the first proposed to put a brake on light. Previous experiments have involved chilling atoms of sodium and rubidium to near absolute zero to slow down and eventually stop waves of light particles, a process which leaves information "stored" on the atoms.

But these experiments can only slow or stop light in a narrow frequency band, Hess said, whereas "our scheme involves the whole frequency domain, the trapped rainbow. It works on all frequencies that you actually put in."

Hess's scheme remains in the theoretical realm for now, until metamaterials can be made small enough to manipulate the short wavelengths of visible light. For metamaterials to work, "they have to be quite a bit smaller than the wavelength," Hess explained.

So for the shorter optical wavelengths, metamaterials automatically have to be nanomaterials, which scientists are on the verge of creating, Hess said.

If these light traps can be created, they could revolutionize information flow and storage, Hess says. Right now, the Internet has a limit to how fast information can flow because "at certain points it's just too much information arriving at the same time," he said.

If data were sent by photons rather than electrons, as is currently the case, certain frequencies could be slowed to allow others through (imposing a speed limit on the photons, as Hess puts it), allowing for more efficient information processing and giving the Internet a higher information capacity.

Stopping light would also allow for storage of photons instead of electrons, which would enable more information to be stored on chips, because "optics have the inherent incredible bandwidth associated with it and so you could not only store one or two bits, but you could store … every single wavelength," Hess said.