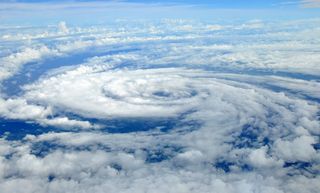 SAN FRANCISCO — The 12 $1-billion-plus disasters that hit the United States this year are most likely not simply a matter of the stars aligning against us, according to the head of the National Oceanic and Atmospheric Administration (NOAA), who implicated climate change as a contributor.

Climate change, caused by carbon dioxide and other greenhouse gases humans have emitted, is expected to increase certain types of extreme weather, leading to more disasters, according to a report being assembled by the Intergovernmental Panel on Climate Change (IPCC).

"The report that was released by the IPCC on extreme events suggests that what we are seeing this year is not just an anomalous year, but a harbinger of things to come for at least a subset of the extreme events we are tallying,"said Jane Lubchenco, NOAA's administrator, during a press conference held here this week at the annual American Geophysical Union meeting.

A summary of the report released in November predicts an increase in certain types of extreme weather, including daily high temperatures, heat waves, heavy precipitation and droughts, in some places. [Photos of Devastating Texas Drought]

With this increase in extreme weather there will likely be an associated uptick in costs. Earlier Wednesday (Dec. 7) the agency announced that this year, so far, had broken the record for costly, weather-related disasters,including drought, wildfire, tornados, flooding, a blizzard and a hurricane. She noted that the agency is still tallying costs related to Tropical Storm Lee and the unseasonable snowstorm in the Northeast that occurred over Halloween weekend.

"I believe there are probably four reasons why we are seeing an increase," said Lubchenco, referring to the number of costly events. "One is there are more extreme events, period, but it is more complicated than that," Lubchenco said, adding that the country now has more people, who have more stuff to lose in disasters, and more people and their stuff now reside in harm's way, such as along the coasts. More people also have insurance that pays for their losses, magnifying the costs associated with a disaster.

The previous record, for nine $1-billion-or-more weather-related disasters was set in 2008.

Of the types of extremes that battered the country this year, only certain large-scale phenomena among them —such as heat waves, droughts and heavy precipitation —have links to climate change.

"We are likely to see more and more of them down the road as climate continues to change," she said.

The connection between small-scale extreme events, such as a localized hailstorm or a tornado, and climate change is less understood, she said.

Since about 1970, NOAA's Climate Extreme Index —which tracks the percentage of the country affected by climate extremes over time —has shown an upward trend that is notably different than the activity in earlier decades, she told an audience of scientists at a talk earlier in the day.

This trend is driven by daily highs and lows, availability of water and heavy precipitation in a single day. Most notably, since 1970, more of the country is experiencing unusually warm nights, with less of the country experiencing unusually cool nights. This particular shift is significant, she said: "Warm overnight lows are related to heat stress in both people, and plants and animals; they never get a chance to cool off."

Likewise, while the country has had periods of severe drought, such as during the Dust Bowl of the 1930s, it has never become drier and wetter at the same time, as has happened in the last decade, she said.