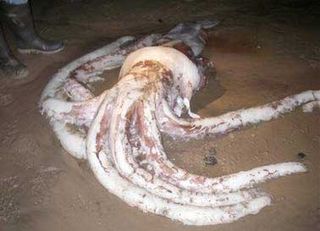 In this photo released by Tasmania Parks and Wildlife Service, a giant squid is seen after it washed up onto Ocean Beach in Strahan, Tasmania, Tuesday, July, 10. 2007. The squid, measuring 1 meter (3 feet) across at its widest point and 8 meters (26 feet) from the tip of its body to the end of its tentacles, was found early Wednesday by a beachcomber at Ocean Beach on the island state of Tasmania's west coast.
(Image: © AP Photo/Tasmania Parks and Wildlife Service, HO)

HOBART, Australia (AP) -- A squid as long as a bus and weighing 550 pounds washed up on an Australian beach, officials said Wednesday.

“It is a whopper,'' said Genefor Walker-Smith, a zoologist who studies invertebrates at the Tasmanian Museum.

Giant squid live in waters off southern Australia and New Zealand -- where a half-ton colossus, believed to be the world's largest, was caught in February. They attract the sperm whales that feed on them.

The dead squid, measuring 3 feet across at its widest point and 26 feet from the tip of its body to the end of its tentacles, was found early Wednesday by a beachcomber at Ocean Beach on the island state of Tasmania's west coast, the museum said.

The squid was expected to be taken to the museum, where DNA and other scientific tests would be carried out before it is preserved and possibly put on public display.

For anyone thinking of a calamari feast, Walker-Smith said giant squid contain high levels of ammonia in their bodies as a buoyancy aid.

“It would not taste very nice at all,'' she said.

New Zealand fishermen netted a 1,100-pound, 33-foot-long squid in the Southern Ocean in February. It is widely believed to be the largest specimen of the rare and mysterious deep-water species Mesonychoteuthis hamiltoni, or colossal squid, ever caught.

Experts believe the creatures, which have long been one of the most mysterious denizens of the deep ocean, may grow even bigger -- up to 46-feet long.