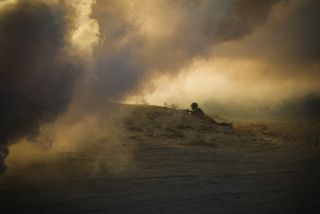 For the 18 or more journalists kidnapped by pro-Gadhafi forces in Libya, detention may be only the beginning of their ordeal.

War correspondents are at high risk of post-traumatic stress disorder, with some studies putting the rate of PTSD among reporters in conflict zones at 25 percent or more. And while there are some protective factors — including journalists' ability to share their stories of trauma — the number of freelancers who lack strong support systems and  are working in ever more dangerous areas is increasing, said Elana Newman, a University of Tulsa psychology professor.

"In areas of conflict, it used to be that journalists were seen as the neutral party and they were protected," Newman told LiveScience. "In the last few years, journalists have become explicit targets of violence." Newman is research director for the Dart Center for Journalism & Trauma, an online resource for journalists who cover violence. [Sidebar: 20 Deadliest Countries for Journalists]

That danger can put journalists at risk for PTSD as well as acute stress disorder, depression and substance abuse, said Josh Klapow, a clinical psychologist at the University of Alabama, Birmingham. Klapow, who is also a mental health consultant for the South Central Center for Public Health Preparedness, said journalists in the field should be given the same mental health consideration as emergency workers.

"We do need to think about these people, these journalists, as first responders," Klapow told LiveScience. "They are there to relay information. They're being placed in harm's way, and they are likely to suffer at least acute psychological effects."

War correspondents are another story. University of Toronto psychiatrist Anthony Feinstein has researched this group and found them to be at high risk for mental illness. Lifetime rates for PTSD in war journalists were four to five times that of the general population, and alcohol consumption was increased, Feinstein wrote in a 2004 Nieman Foundation report.

Recent conflict in the Middle East has placed journalists in the path of danger. In February, CBS reporter Lara Logan was sexually assaulted by a crowd of men in Cairo. Earlier this month, Fox's Geraldo Rivera found himself ducking for cover amid the crossfire between Libyan rebels and President Moammar Gadhafi's forces. In March, four New York Times journalists were kidnapped and beaten by Gadhafi forces for days before being released. Currently, at least 18 foreign and domestic journalists are kidnapped or missing in Libya, according to the nonprofit Committee to Protect Journalists.

Fourteen journalists have died in the line of duty in 2011, according to the CPJ. [Fight, Fight, Fight: The History of Human Aggression]

Everyone responds to trauma differently, Newman said, but there are some PTSD risk factors for war journalists, including personal trauma or stress outside of work, lack of perceived social support, and job stress. Given the recent financial upheavals in the journalism field, Newman said, the latter two of those risk factors are a concern. Freelancers — who are hired by a media outlet for only one story, or who report a story on their own and hope to sell it — may not have networks of co-workers looking out for them. Meanwhile, staff writers may be more vulnerable to trauma if their news organization is struggling to keep the doors open.

Whether journalists feel the outcome of their work was worth their trauma may be another risk factor, Newman said. Telling the story of a kidnapping — as the four New York Times reporters did after their release from Libya — can be therapeutic. But being unable to complete their original assignment can have the opposite effect.

"Many journalists are there to tell a story, and it's not just a job, it's a calling," Newman said. "If they get thwarted in their goal, it makes the violence or the harassment endured more difficult to tolerate."