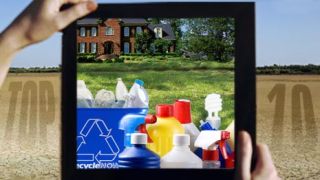 If you're going to do just one thing for the planet, make it the switch to compact fluorescent light bulbs (CFLs). Although they cost several times more upfront than regular incandescent light bulbs, they also last about 10 times longer, which means that for every CFL you screw in, you'll be saving eight incandescent light bulbs from landfill purgatory. Plus, you'll save some serious cash in the long run. Because CFLs use 75 percent less energy, swapping one incandescent bulb for a CFL reduces carbon dioxide by 500 pounds a year; replacing 17 has the equivalent effect of taking one car off the road for a year. Just remember to recycle spent bulbs responsibly - CFLs contain trace amounts of mercury, which although isn't enough to be hazardous to you, could pose a problem in landfills when mercury from multiple bulbs leaches into the ground.

The average home can pump out twice as much greenhouse-gas emissions as the average car. Purchasing energy-saving Energy Star-rated appliances, electronics, and lighting can help mitigate that, while slashing a third of your electric bill. (A power guzzler is nobody's friend.) Improving the energy efficiency of your home could even earn you tax credits from Uncle Sam.

Eschew plastic bags by bringing your own reusable canvas totes the next time you're at the supermarket or store. Because petroleum-based plastic isn't biodegradable, it's certain to outlive you-by about a millennium or so. Each year, thousands of marine animals, including the endangered leatherback turtle, choke to death on plastic trash they mistake for snackable morsels. Our unholy love for plastic disposables has also bred a swirling vortex of plastic trash the size of Texas in the North Pacific Ocean-not surprising when you consider that Americans run through about 100 billion plastic bags annually, using up an estimated 12 million barrels of oil.

Deforestation is responsible for 25 percent of all carbon emissions released into the atmosphere, through the burning and cutting of 34 million acres of trees annually. Save some virgin and old-growth forests by opting out of paper catalogs and browsing online, instead. Why did you think Al Gore invented the Internet? Shed those extra 41 pounds of junk mail the average American packs on each year by removing yourself from direct-mail mailing lists; if you need a tad more help, companies such as GreenDimes and 41pounds.org have got your back.

Who knew cauliflower were such globe-trotters? Or that jet-setting tomatoes racked up frequent-flier miles? But it's true: North American produce typically travels a minimum of 1,500 miles. Grapes can clock 2,143 miles cruising from vineyards in Napa Valley to supermarket aisles in Chicago, gobbling up barrels of crude oil and spewing pollutants and greenhouse-gas emissions in their wake. By buying your produce locally, whether it's through the farmers' market or a community-assisted agriculture program, you can reduce your "food miles," otherwise known as the distance your food has to travel to get from the farm to your plate. Now that's fresh.

Start rolling those Rs: Reduce, reuse, and recycle-and in that order. Let's face it, we're mired deep in ecological debt because we're consuming more resources than nature can replenish. By gorging on more than our fair share of the world's resources, we're also diverting essentials such as food, clothing, and water from communities in greater need. So let's recap: It's better to reduce your personal consumption than it is to reuse something, and itâ€™s less environmentally taxing to reuse a product than to have it recycled. Separating recyclables from your regular trash, which barely takes any effort, is a no-brainer, of course; recycling aluminum, for instance, takes as little as 5 percent of the energy we'd need to manufacture virgin aluminum.

Get Off the Grid

Opt for clean, renewable energy if it's offered in your area. Low-impact sources such as wind, solar, and hydroelectric power reduce our dependence on coal-burning power plants, a major source of greenhouse-gas emissions. And because harnessing the power of renewable "fuels" such as sun and wind are free, your electric bill is likely to scale down because of the reduced price of wholesale electricity.

You may not know it, but households across the globe are infested with vampires. Energy vampires, that is. Cleverly disguised as innocuous household appliances (psst, your television is one of them), their nasty pointed teeth plunge deep into your wall socket, draining power all hours of the day and night, even after you've switched them off. (Americans pay $1 billion a year to power our televisions and VCRs while they're turned off.) Other sleeper agents of the electric undead that consume 1,000 kilowatt hours a year per household, while in standby mode: your toaster, coffeemaker, hair dryer, PC, printer, cable box, and cell phone charger. You donâ€™t have to live in a constant state of fear, however, forever checking behind your back for that one appliance you forgot to pull the plug of. Just plug adjacent equipment into power strips with surge protectors, and before you crawl under the safety of your covers-or head out to work-simply flip the switch.

Our chemical arsenal may be able to exterminate creepy crawlies and polish our countertops, but they're slowly killing us, too. The man-made chemicals we favor are like the obnoxious houseguest who overstays his welcome-an average of 200 industrial compounds, pollutants and other chemicals, for instance, were recently discovered in the umbilical-cord blood of newborns. (These included seven dangerous pesticides, some of which were banned in the U.S. more than 30 years ago.) Weâ€™re serving our kids potent chemical cocktails even before they're born-not quite the head start they may have been hoping to get. Pesticides have also been implicated in Parkinsonâ€™s disease, infertility, brain damage, and cancer. So ditch the poisons and choose natural, non-toxic, and equally effective methods of cleaning and corralling pests. You probably already have what you need in your kitchen to get started. Chowing down on organically grown food will cut out pesticides from your diet, as well.

Trees, in a word, rock. They absorb heat-trapping carbon dioxide, hold soil together to prevent landslides, and provide a rich habitat for diverse plants and animals. Choose furniture made from eco-friendly sources such as sustainably managed forests, bamboo, and reclaimed wood. Buying vintage wherever possible, rather than adding something new into the waste stream, is always in style. Also, look for furniture that is durable and likely long-lived-you'll save money on replacements in the future and prevent more wasted materials from winding up in the landfill. And, if for some reason, that dresser or dining table no longer suits your needs, something in fine shape will always have takers via Craig's List, eBay, or Freecycle.