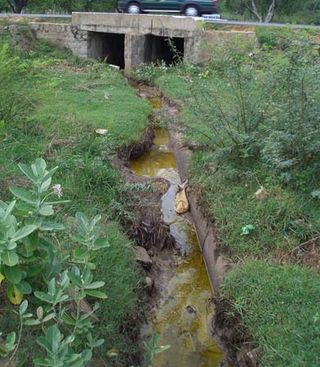 Areas that researchers have declared the most polluted in the world are typically little known even in their own countries. Yet they in total afflict more than 10 million people, experts reported today.

The kinds of pollution in these areas not only lead to cancers, birth defects, mental retardation and life expectancies approaching medieval levels, but are also often found all around the globe.

"They cause an enormous amount of misery and harm, especially to children," Richard Fuller, founder and director of the Blacksmith Institute, the New York-based environmental group who released a report on these areas today, told LiveScience.

The Top 10 most polluted places for 2006, in alphabetical order by country:

Linfen, China, where residents say they literally choke on coal dust in the evenings, exemplifies many Chinese cities;

Mailuu-Suu, Kyrgyzstan, home to nearly 2 million cubic meters of radioactive mining waste that threatens the entire Ferghana valley, one of the most fertile and densely populated areas in Central Asia that also experiences high rates of seismic activity;

Dzerzinsk, Russia, one of the country's principal chemical weapons manufacturing sites until the end of the Cold War [image];

Chernobyl, Ukraine, infamous site of a nuclear meltdown 20 years ago; and

The research team analyzed 35 polluted sites, narrowed down from more than 300 nominated by local communities, non-governmental organizations and local, national and international environmental authorities. The team was made up of international environment and health experts, including faculty members from Johns Hopkins and Mt. Sinai Medical Center serving on the technical advisory board of the Blacksmith Institute.

Fuller said the institute is currently working with national and international organizations to help clean up six of these sites.