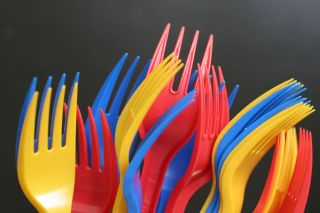 Beneath a slimy fa?ade, the sea slug is somewhat of a brainiac.

CHICAGO--A biodegradable plastic that dissolves into nontoxic components in seawater could make it environmentally safe to ditch "disposable" forks, spoons, wraps and other such waste overboard from ships to free up valuable space.

"There are many groups working on biodegradable plastics, but we're one of a few working on plastics that degrade in seawater," said researcher Robson Storey, a polymer scientist at University of Southern Mississippi. "We're moving toward making plastics more sustainable, especially those that are used at sea."

Cruise liners, naval warships and other vessels generate huge volumes of plastic trash, such as stretch wrap for large cargo items, food containers and eating utensils. This junk often remains onboard for long spans of time until ships make port. Simply dumping such junk overboard is hazardous because conventional plastics can take years to break down and may result in toxic byproducts.

When exposed to seawater, the new plastics can dissolve in as few as 20 days. They are made of polyurethane modified to incorporate a biodegradable compound known as PLGA, which is used in medical sutures.

By varying the chemical makeup of the plastic, the scientists have developed materials that range from soft and rubbery to hard and rigid, making them potentially useful for a variety of applications. After they dissolve, "our goal is for them to break down into carbon dioxide and water," Storey told LiveScience. Other natural organic chemical byproducts, such as lactic acid, which is found in milk, also might be generated.

The new plastics are denser than saltwater, making them inclined to sink rather than float. This could help prevent them from washing up on shores and polluting coastlines, Storey said.

The plastic is undergoing degradation testing at military and university labs, and initial results are promising, Storey said. It has not been tested in freshwater yet.

Future research also has to optimize the plastics for changes in temperature, humidity, seawater composition and other environmental conditions. The future manufacturers of these plastics also would have to overcome legal hurdles, as international maritime law currently forbids disposal of plastics at sea.

The team presented their findings Tuesday at the American Chemical Society annual meeting.