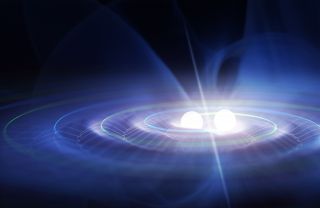 Gravitational waves slosh throughout the universe as ripples in space-time produced by some of the most cataclysmic events possible.

With facilities like the Laser Interferometer Gravitational-Wave Observatory (LIGO) and Virgo, we can now detect the strongest of those ripples as they wash over the Earth. But gravitational waves leave behind a memory — a permanent bend in space-time — as they pass through, and we are now on the verge of being able to detect that too, allowing us to push our understanding of gravity to the limits.

Despite the fact that it's over a century old, Einstein's theory of general relativity is our current understanding of how gravity operates. In this view, space and time are merged together into a unified framework known as (no surprises here) space-time. This space-time isn't just a fixed stage but bends and flexes in response to the presence of matter and energy.

That bending, warping and flexing of space-time then goes on to tell matter how to move. In general relativity, everything from bits of light to speeding bullets to blasting spaceships want to travel in straight lines. But the space-time around them is warped, forcing them all to follow curved trajectories — like trying to cross a mountain pass in a straight line, but following the peaks and valleys of the topography.

What we call "gravity" is then the result of all that warping of space-time, and the fact that moving objects have no choice but to follow the curves and undulations of space-time around it.

And like any other flexible surface, space-time doesn't just bend and flex; it also vibrates.

If you stand on a trampoline, you'll bend the trampoline down. If anyone tries to walk on the trampoline near you, they will feel your "gravity" and be forced to follow a curving path. But far enough away from you, they won't even notice your gravitational influence.

But if you start jumping up and down on the trampoline, you'll send waves and tremors through the whole thing, and they can't help but be influenced by your motion.

Gravitational waves act in the same way, transmitting energy through ripples in the fabric of space-time itself. These ripples originate from just about every kind of motion possible, but since gravity is so weak (it is the weakest force of nature billions of times over), and gravitational waves are weaker still, only the most energetic movements are capable of creating ripples able to be detected with instruments here on Earth.

So far, our gravitational-wave observatories LIGO and Virgo have spotted dozens of cataclysmic events, involving mergers of massive black holes and neutron stars. The gravitational waves from these events ripple throughout the universe, washing over the Earth. When they do, they ever-so-slightly (as in, less than the width of an atom) move things around.

Even you. Right now, you are being gently squeezed and stretched by gravitational waves from violent events billions of light-years away.

You might think that the event is over once the wave passes, like a breaker crashing onto you at the beach and washing onto the shore. But gravity is a tricky thing, and gravitational waves are trickier still.

In other words, when gravitational waves wash over you, you don't just stretch and squeeze temporarily. When all is said and done, you are left permanently stretched.

Looking to the future

Since the gravitational waves generated by gravitational waves are so weak, we haven't found any evidence for this space-time "memory" yet, but it should be there, lurking in the data taken by LIGO and Virgo. What we ought to see is a lasting shift in the position of the detectors, well after the passage of the confirmed gravitational-wave event.

Recently, a team of astronomers examined what it would take to finally see a gravitational wave memory. Since each individual detection leaves behind only an incredibly weak memory, we won't be able to see such phenomena one by one. Instead, we have to add together multiple events to build up the evidence needed to signify a detection.

And how many events will we need? The researchers predict that we will need to record around 2,000 individual black hole mergers before we'll be able to spot the permanent memory left behind. This number of detections won't happen anytime soon, but the next generation of gravitational-wave observatories, which will hopefully collect around 10 events per day, could find this memory within a year of observations.

This permanent space-time memory ought to be there — if our predictions from general relativity are correct. And if we don't find anything after a few years of searching, we'll have to re-examine our understanding of gravity and see if we forgot something.

You can listen to the Ask A Spaceman podcast on iTunes, and on the Web at http://www.askaspaceman.com. Ask your own question on Twitter using #AskASpaceman, or by following Paul @PaulMattSutter and facebook.com/PaulMattSutter. Follow us on Twitter @Spacedotcom or Facebook.