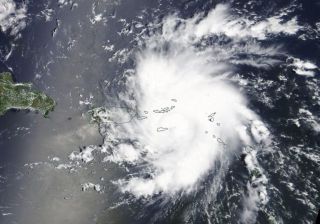 NASA's Terra satellite captured this image of the storm Dorian as it turned into a hurricane near St. Thomas on Aug. 28 at 1:30 pm ET.
(Image: © NASA Worldview, Earth Observing System Data and Information System (EOSDIS))

Tropical Storm Dorian gathered strength and turned into a hurricane this afternoon near the island of St. Thomas in the U.S. Virgin Islands, according to the National Hurricane Center (NHC).

The storm is currently moving northwest at 13 mph (21 km/h) over the U.S. Virgin islands. It's expected to continue in that direction for the next couple of days, moving over the Atlantic east of the Bahamas and possibly hitting Florida.

A hurricane warning is currently in effect in Vieques and Culebra in Puerto Rico as well as the U.S. and British Virgin Islands. Meteorologists expect the storm to strengthen even more, up to a Category 3 hurricane (winds of 111 to 129 mph, or 178 to 208 km/hr) before possibly hitting Florida over the weekend.

"All indications are that by this Labor Day weekend, a powerful hurricane will be near the Florida or southeastern coast of the United States," the NHC wrote in a public advisory.

Though it's not yet certain that the storm will hit the U.S. at all, the NHC is recommending that residents be prepared in case it does.

"The risk of dangerous storm surge and hurricane-force winds is increasing in the central and northwestern Bahamas and along the Florida east coast, although it is too soon to determine where these hazards will occur," NHC officials wrote in the public advisory. "Residents in these areas should ensure that they have their hurricane plan in place and not focus on the exact forecast track of Dorian's center."

The storm will likely bring heavy rainfall with the potential to produce flash flooding during the next couple of days over parts of Puerto Rico and the U.S. and British Virgin Islands, according to the public advisory. Heavy rain also will hit the Bahamas, Florida and the southeastern U.S. later this week and early next week.