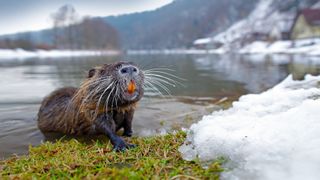 Nutria are resilient. The South American mammals have been thriving in their non-native North American habitats over the last 70 years, often at the expense of the local ecosystem.
(Image: © Shutterstock)

Nutria, also known as coypu or swamp rats, are large rodents that live in areas with lots of freshwater.

These mammals are native to South America and were introduced into the United States between 1899 and 1930 through the fur industry, according to the U.S. Fish and Wildlife Service (FWS). Nutria are now considered a nuisance in the U.S. and other parts of the world where their populations have grown and their presence has disrupted the native ecosystem.

Nutria (Myocastor coypus) are relatively big rodents that grow to between 17 and 25 inches long (43 to 64 centimeters) from head to rump, which is about the same size as a raccoon. Their tail adds another 10 to 16 inches (25 to 41 cm) and the animals weigh between 15 and 22 pounds (7 to 10 kilograms), according to National Geographic. Although they're about the size of a raccoon, nutria look more like a cross between a small beaver and a giant rat, with two large, orange front teeth and long, rounded tails.

Nutria breed year-round and can have up to three litters a year with between two and 13 offspring per litter, allowing their populations to rapidly grow, according to the California Department of Fish and Wildlife (CDFW). These mammals become sexually mature as early as 4 months of age, and females can breed again about 1 to 2 days after giving birth, according to U.S. Fish and Wildlife Service (FWS). After a gestation period of about 4 months, nutria pups will nurse for about 7 to 8 weeks and stay with their mom for around 10 weeks, but pups can also survive on their own when they're as young as 5 days old.

Nutria are aquatic creatures and prefer freshwater to saltwater. They live in burrows connected by tunnels that they dig near rivers, canals, lakes or in wetlands, according to National Geographic.

These animals live in groups that typically consist of two to 13 individuals, according to the University of Michigan Museum of Zoology's Animal Diversity Web. The group often includes related adult females, their offspring and a single adult male. Young adult males are usually solitary, but don't often wander far from where they were born. Males have a home range of about 14 acres, while females stay even closer to home, keeping within about a 6-acre radius.

Nutria have a voracious appetite for wetland plants and will chow down an entire plant — roots, bark and all, according to Animal Diversity Web. The furry rodents will occasionally eat small invertebrates such as insects and snails, according to FWS. But nutria aren't considered picky eaters as they're often caught eating crops such as rice, sugarcane and corn.

Why nutria are a problem

Nutria are native to the marshes and coastal lakes in Bolivia and Southern Brazil, according to Columbia University. Their populations in those locations are kept in check by the seasonal drought-flood cycles. Periods of drought decimate their population, but thanks to their rapid reproduction rate, the nutria are able to recover during the flooding season.

In the 1800s, fur traders brought nutria to the U.S. so that the animals could be easily harvested for their thick and soft undercoat of fur. But when the fur market collapsed in the mid 1900s, many nutria farmers couldn't afford to keep their animals and released them into the wild.

The nutria not only survived, but thrived in their non-native homes. Today, nutria populations are found across the U.S., primarily in the coastal states, according to FWS. They're also an invasive species in Europe, Asia and Africa due to fur-farm escapees, according to the Global Invasive Species Database.

Nutria are now considered one of the most ecologically harmful invasive species on the planet.

"As an exotic invasive species in our North America wetlands, they can be especially destructive since plant species did not evolve with this forager," said Thomas Gehring, a professor of ecology and biology at Central Michigan University in Mount Pleasant, Michigan.

Nutria eat about 25% of their body weight each day in plants and their roots, wreaking havoc on the native ecosystem. Because the animals eat the entire plant, the vegetation are less likely to grow back, according to National Geographic. The removal of the root systems destabilizes the soil around the water, which causes it to quickly erode and become open water.

The burrowing habits of nutria also damages flood-control levees that protect low lying areas and water retaining levees used in agriculture, according to the U.S. Department of Agriculture's Wildlife Damage Management extension. Their activity can cause such extensive damage that the levees need to be completely reconstructed. The destructive creatures also burrow into the flotation supports under boat docks and wharves, underneath building foundations, roads, streams and dams, which can weaken these structures and cause them to lean, sink and collapse.

As mentioned, nutria will dine on numerous agricultural crops, such as rice, corn, wheat and more. They've also been known to gorge on home vegetable gardens and freshly planted grass.

Not only are invasive nutria catastrophic for the environment, but they also play host to several diseases and parasites including tuberculosis, tapeworm, liver flukes and nematodes. It can be a significant health hazard for people and animals to drink or swim in water contaminated by nutria feces and urine, according to FWS.

How to prevent further damage

Because nutria are such a prolific and resilient species, controlling their populations to curb further environmental damage is a significant challenge. Environmental groups around the U.S. have tried a range of tactics, with varying success.

The Oregon Department of Fish and Wildlife has found that excluding nutria from their preferred environments to be the most effective approach. The agency recommends building 3-foot (91-cm) wire fences buried at least 6 inches (15 cm) underground around gardens and lawns, putting electric wire fences around vegetation, or constructing sheet metal shields around wood structures to prevent nutria from gnawing on them.

But other agencies and experts think a more offensive approach is better. "The only effective means we have is trapping and/or shooting nutria," Gehring said. "But that takes a concerted and sustained effort."

State agencies from Maryland, Virginia and Delaware have partnered with the U.S. Department of Agriculture and FWS to eradicate local nutria populations. The groups are working with public and private landowners to monitor the animals' habitats, so that they can set traps and humanely euthanize the mammals, according to the U.S. Department of Agriculture. Some groups also use dogs to detect, track and trap nutria to prevent them from re-establishing their populations in locations where they had been removed, Gehring said.

Continuous monitoring and removal of nutria is especially important as global warming increases the number of potential nutria habitats in North America, according to a 2019 study published in The Journal of Wildlife Management.

In many of the places involved with containment and eradication of nutria, groups are working to rebuild the ecosystem that the animals damaged or destroyed. In some instances, a wetland area can recover and rebuild itself on its own, but oftentimes active restoration efforts, such as planting native plants and replenishing the soil, are required to help rebuild the ecosystem, Gehring said.

It just takes a single, pregnant female to quickly repopulate an area from which nutria were previously eradicated. So, in order to keep restoration efforts moving forward, it is important that any sightings of the creatures be reported to state and federal wildlife agencies, even in places where the animals are thought to be completely absent.