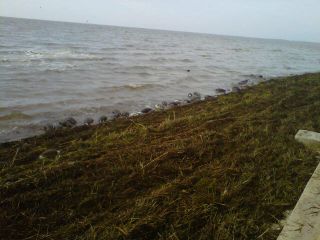 The aftermath of Hurricane Isaac has washed ashore tens of thousands of dead "swamp rats," invasive species whose rotting corpses are now presenting a health hazard in Mississippi.

The drowned rodents, known as nutria, are a stark reminder of the effects of hurricanes on wildlife, which can range from mass death to — surprisingly enough — dolphin baby booms. In the case of the nutria, the drownings may be a blessing for the Gulf Coast, where the beaver-like creatures wreck havoc on native marsh vegetation.

The clean-up, though, is proving unpleasant.

Nutria aren't the only animals to suffer after hurricanes. A study of alligators in southwest Louisiana after Hurricane Rita hit in 2005 found that the reptiles were physically stressed a month after the initial storm surge inundated their marshy habitat. Blood tests on the gators showed elevated stress hormones as well as other signs of ill health, the researchers reported in February 2010 in the Journal of Experimental Zoology Part A: Ecological Genetics and Physiology.

Research on Florida manatees has suggested that docile "sea cows" die more frequently during years with extreme storms, perhaps due to immediate causes like getting swept out to sea, or perhaps due to post-hurricane environmental changes such as cooling in coastal waters, according to a 2006 paper published in the journal Estuaries and Coasts. That study tracked a handful of manatees through the 2004 and 2005 hurricane seasons and found that the animals tended to "ride out" the storms in place rather than attempt to avoid them.

Other studies have found changes in fish populations right after hurricanes, as well as changes in phytoplankton, the algal basis of the ocean food chain, though these changes are short-lived. Sometimes, though, hurricane effects echo over long time periods. A 2010 study on bottlenose dolphins found that two years after Hurricane Katrina, the number of baby dolphins in the Gulf of Mexico suddenly skyrocketed. [Photos: World's Cutest Baby Animals]

Some of the jump could be explained by dolphin mamas getting pregnant sooner than usual after losing their previous calves in the storm, the researchers reported in the journal Marine Mammal Science. But the storm had another effect: It destroyed a significant chunk of the Gulf of Mexico fishing fleet. Fewer fishermen meant more food for dolphins and their young, the researchers concluded.

Mississippi's nutria population took a hit from Isaac. Sanitation workers have been cleaning up the carcasses with pitchforks and front-end loaders.

"Estimates are there will be over 20,000 carcasses, but that is unclear now," Robbie Wilbur, a spokesman for the Mississippi Department of Environmental Quality, told LiveScience. "Eventually, the totals will be numerated in tons when they're all disposed."

The carcasses are being sent to the Pecan Grove landfill in Harrison County, Miss., Wilbur added.

"It's starting to get bad," said Mark Williams of the Department of Environmental Quality's Solid Waste Management branch. "It's heated up over the last two or three days, and of course that really expedites the degradation process."

Nutria are native to South America, but the rodents were brought to North America in the late 1800s and farmed for their fur. Escaped and released nutria established themselves in the marshes of the Gulf Coast, where they gnaw the roots of marsh plants, destroying the vegetal web that keeps the marshes from washing away.

Hurricane Isaac likely won't set Mississippi's nutria population back for long. Nutria can produce litters with as many as 13 babies, and they're capable of reproducing twice a year starting at as early as four months of age. Baby nutria begin supplementing their mother's milk with marsh vegetation within hours of birth.