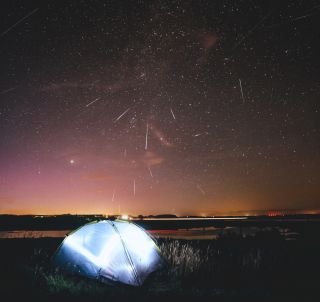 In our solar system there are billions, possibly trillions, of rogue objects orbiting the sun. These spacefarers are too small to be called planets and are given the names of comets, asteroids, meteoroids, and if they reach Earth, meteors or meteorites. With so many labels, it's easy to forget which is which.

Let's start with a brief definition of each.

Asteroids: These are the rocky and airless leftovers from the formation of planets in our solar system. They mostly orbit our sun in the asteroid belt between Mars and Jupiter and range from the size of cars to dwarf planets.

Meteoroids, Meteors, Meteorites: Meteoroids are tiny asteroids or the broken-off crumbs of comets and sometimes planets. They range in size from a grain of sand to boulders 3 feet (1 meter) wide. When meteoroids collide with a planet's atmosphere, they become meteors. If those meteors survive the atmosphere and hit the planet's surface, their remains are called meteorites.

At first glance, asteroids may seem like run-of-the-mill space rocks, but these ancient solar system remnants come in all shapes, sizes and flavors.

Despite their small stature (the mass of all the asteroids combined is less than Earth's moon), asteroids are also called minor planets or "planetoids." They range in size from the smallest boulders, 3 feet across (1 m), to the largest asteroid, Ceres, which is nearly a quarter the size of Earth's moon (about 590 miles in diameter, or 950 kilometers). Ceres is so large, it received a promotion to the status of a dwarf planet in 2006, the same controversial distinction given to Pluto.

Most asteroids look like giant space potatoes, with their oblong shapes and surface that's pockmarked by numerous craters caused by collisions with other asteroids. Only a small number of asteroids are large enough that their gravity forms them into spheres, such as Ceres. The composition of asteroids range from dark, rocky clumps of rubble consisting of clay and silicate rocks to bright and solid amalgamations of metals such as iron or nickel, according to NASA.

Nearly all asteroids are found in a doughnut-shaped region between Mars and Jupiter, called the asteroid belt. The belt formed not long after the birth of Jupiter when the massive planet's gravity trapped planet-forming leftovers, causing them to collide with one another and form the millions of asteroids we see in the belt today.

For millennia, the sight of a comet elicited fear and awe. Ancient astronomers believed comets foretold the death of princes and the outcomes of wars. Modern astronomers know comets are the ice-clad leftovers from the material that formed our solar system billions of years ago.

Astronomer Fred Whipple was the first to describe comets as dirty snowballs, or icy conglomerates of frozen gases and dust. The snowball makes up the central nucleus of a comet, which is often less than a few miles across, according to NASA. When a comet nears the sun, the nucleus warms up and the ice begins to sublimate from solid to gas. This produces an atmosphere surrounding the comet that can grow to thousands of miles in diameter, called a coma. Radiation pressure from the sun blows away the dust particles in the coma to produce a long, bright dust tail. A second tail is formed when high-energy solar particles ionize the gas, creating a separate ion tail.

The difference between the composition of asteroids and comets is likely due to how and where they were born, wrote Britt Scharringhausen, a professor of astronomy at Beloit College in Wisconsin.

"While asteroids and comets did form at the same time, they did not form under quite the same conditions," Scharringhausen wrote. "The solar system formed from the solar nebula, a cloud of gas and dust. At the center of the nebula, the sun was being born through gravitational collapse. Because of this collapse, which releases heat, the central regions of the nebula were hotter and denser, while the outer regions were cooler."

Asteroids formed near the center of the hot nebula where only rock or metal remained solid under extreme temperatures. Comets formed beyond what's called the frost line, where it was cold enough for water and gases like carbon dioxide to freeze. Because of this, comets generally are found only in the far reaches of the solar system in two regions named the Kuiper Belt and the Oort Cloud.

Meteoroids are the true space rocks of the solar system. No larger than a meter in size (3.3 feet) and sometimes the size of a grain of dust, they are too small to be considered asteroids or comets, but many are the broken pieces of either. Some meteoroids originate from the ejected debris caused by impacts on planets or moons.

If meteoroids happen to cross paths with a planet's atmosphere, like Earth's, they become meteors. The fiery flash given off by meteors when they burn up in the atmosphere can appear brighter than the planet Venus, which is why they've earned the nickname "shooting stars," according to NASA. Scientists estimate more than 48 tons (43,500 kilograms) of meteoritic material falls to Earth every day. If a meteor survives its descent through the atmosphere and hits the ground, it's called a meteorite.

When Earth passes through the trail of debris left by a comet we're treated to the dazzling fireworks display of a meteor shower, where thousands of shooting stars can be seen in the night sky. The Perseid meteor shower is one of the most spectacular, occuring every year around Aug. 12. At its peak, 50 to 75 meteors can be seen per hour if the sky is clear. The Perseids are caused by the meteoroids broken off from Comet Swift-Tuttle.

These brilliant meteor showers serve as a reminder that despite the seemingly empty expanse of space, we're more closely connected to our solar system than we imagine.