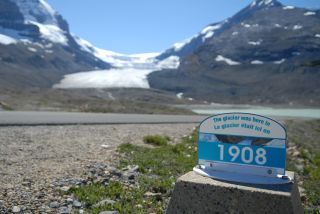 Human-caused climate change has resulted in record rates of glacial melting. This glacier and the marker of it's edge in 1908 is in Jasper National Park, Canada.
(Image: © Shutterstock)

Climate change is any long-term alteration in average weather patterns, either globally or regionally. As this broad definition suggests, climate change has occurred many times in Earth's history, and for many reasons. The changes in global temperature and weather patterns seen today, however, are caused by human activity. And they're happening much faster than the natural climate variations of the past.

Scientists have many ways to track climate over time, all of which make it clear that today's climate change is linked to the emission of greenhouse gases such as carbon dioxide and methane. These gases are effective at trapping heat from the sun's rays near Earth's surface, much like the glass walls of a greenhouse keep heat inside. Small changes in the proportions of greenhouse gases in the air can add up to major change on a global scale.

On average, the effect of greenhouse gases is to increase global temperatures. This is why climate change is sometimes called global warming. But most researchers today prefer the term climate change because of the variability of weather and climate across the globe. For example, warming global average temperatures might alter the flow of the jet stream, the major air current affecting North American weather, which could in turn lead to seasonal periods of extreme cold in some areas.

"It's important for people to realize that there is a lot of variability from place to place on the Earth in terms of the temperature," said Ellen Mosley-Thompson, a paleoclimatologist at the Byrd Polar and Climate Research Center of The Ohio State University. "When we talk about global climate change, we're talking about temperature changes over large areas."

The climate of the past is recorded in ice, sediments, cave formations, coral reefs and even tree rings. Researchers can look at chemical signals — such as the carbon dioxide trapped in bubbles inside glacial ice — to determine atmospheric conditions in the past. They can study microscopic fossilized pollen to learn what vegetation used to thrive in any given area, which in turn can reveal what the climate was like. They can measure tree rings to get a season-by-season record of temperature and moisture. Ratios of chemical variants of oxygen in corals and stalactites and stalagmites can reveal past precipitation patterns.

Different types of natural records have different strengths. Ocean sediments don't carry season-by-season or even year-by-year levels of detail, but they can provide blurrier pictures of climate dating back millions of years, Mosley-Thompson told Live Science. (The oldest cores drilled from ocean sediments date back 65 million years, according to The Smithsonian Institution.) Tree records are relatively short but incredibly detailed. And ice can be chock-full of information: Not only do glaciers capture atmospheric gases in the form of air bubbles, they trap dust and other sediments, pollen grain, volcanic ash and more. As the ice gets older and more compressed, the record can become fuzzy, Mosley-Thompson said, but newer ice can provide a year-by-year look at what the climate was doing.

The most recent changes in the climate — since the beginning of the Industrial Revolution — can also be tracked directly. Keeping records of things like land temperature began to improve in the late 1800s, and ship captains began to keep a wealth of ocean-based weather data in their logs. The advent of satellite technology in the 1970s has provided an explosion of data, covering everything from ice extent at the poles to sea surface temperature to cloud coverage.

How the climate is changing

Taken together, these records have shown that the modern climate is undergoing a swift departure from the patterns of the past.

Before the Industrial Revolution, there were about 280 carbon dioxide molecules for every million molecules in the atmosphere, a measure known as parts per million (ppm). As of 2018, the global average level of CO2 was 407.4 ppm, more than 100 ppm higher than that level has been for the past 800,000 years, according to the National Oceanic and Atmospheric Administration (NOAA). The last time atmospheric carbon reached today's levels was 3 million years ago, according to NOAA.

The rate of change in today's atmospheric carbon is also faster than in the past, according to NOAA. The rate of increase was 100 times faster over the past 60 decades than any time in the last million years or so — a period that saw eight major climate flip-flops between glacial cycles, in which ice expanded from the poles into the middle latitudes, and interglacial cycles, in which the ice retreated to where it is today. And the rate continues to increase. In the 1960s, atmospheric carbon went up by an average of 0.6 ppm a year. In the 2010s, it rose an average of 2.3 ppm per year.

The heat-trapping ability of all that extra carbon has translated to rising global average temperatures. According to NASA's Goddard Institute for Space Studies (GISS), Earth's average temperature has risen by just over 2 degrees Fahrenheit (1 degree Celsius) since 1880, a measurement accurate to within a tenth of a degree Fahrenheit. As with the rate of atmospheric carbon increase, the rate of global temperature increase is also speeding up, according to NASA's Earth Observatory: Two-thirds of that warming has occurred since 1975.

What are the impacts of climate change?

This warming has translated to changes in Earth ecosystems and environments. Among the most dramatic changes have occured in the Arctic, where sea ice is on the decline. Ice extent lows and record lows have been the new normal since 2002, according to NASA, and studies are finding that even the oldest, multiyear sea ice is thinning rapidly. Scientists now expect the first ice-free Arctic summer sometime between 2040 and 2060.

Glaciers are retreating globally, particularly in the middle latitudes, Mosley-Thompson said. Montana's Glacier National Park was home to 150 glaciers in 1850. Today, there are only 25. Mosley-Thompson and her team estimate that the last tropical glaciers will disappear within the next decade.

Melting ice and the expansion of ocean waters due to heat have already contributed to sea level rise. According to NOAA, global average sea level has risen 8-9 inches (21-24 centimeters) since 1880. The rate of rise is increasing, from 0.06 inches (1.4 millimeters) per year in the 20th century to 0.14 inches (3.6 mm) per year from 2006-2015. According to NOAA, this sea level rise has translated to a 300% to 900% increase in high-tide flooding in coastal areas in the United States.

Ocean water absorbs carbon dioxide from the atmosphere, which creates a chemical reaction that causes ocean acidification. Global average pH of ocean surface waters has decreased by 0.11 since the Industrial Revolution began, a 30% increase in acidity, according to NOAA's Pacific Marine Environmental Laboratory. Increasing ocean acidity makes it more difficult for corals to build their carbonate skeletons and for shelled animals such as clams and some types of plankton to survive.

Climate change is even affecting the timing of spring-like weather. The earliest spring (as defined by plant growth and temperatures) on record in the United States was in March 2012. Climate models now suggest that such early springs could be the norm by 2015. But late freezes will likely still occur, creating conditions in which plants could leaf out early and then be damaged by cold temperatures. Climate models also predict the exacerbation of alarming trends in droughts and wildfires thanks to warmer temperatures.

Models are a key tool for climate scientists, said Kathie Dello, North Carolina's state climatologist. There's no comparison planet for Earth, Dello said, but models allow scientists to create virtual versions of the planet to test different scenarios. Though the Earth system is complicated, these computer models have proved capable of predicting the future. A 2020 paper in the journal Geophysical Research Letters found that climate model predictions published between the 1970s and 2010 were accurate when compared with the actual warming that occured after publication.

Can we reverse climate change?

A growing number of business leaders, government officials and private citizens are concerned about climate change and its implications, and are proposing steps to reverse the trend.

"While some argue that 'the Earth will heal itself,' the natural processes for removing this human-caused CO2 from the atmosphere work on the timescale of hundreds of thousands to millions of years," Josef Werne, a geochemist and paleoclimatologist at the University of Pittsburgh, said. "So, yes, the Earth will heal itself, but not in time for our cultural institutions to be preserved as they are. Therefore, in our own self-interests, we must act in one way or another to deal with the changes in climate we are causing."

If all human greenhouse gas emissions stopped immediately, Earth would likely still experience more warming, some studies suggest, because carbon dioxide remains in the atmosphere for hundreds of years. There are proposals that could theoretically reverse some of this "locked in" warming by removing carbon dioxide from the atmosphere, such as carbon capture and storage, which involves injecting carbon into underground reservoirs. Advocates argue that carbon capture and storage is technologically feasible, but market forces have prevented widespread adoption.

Whether or not removing already-emitted carbon from the atmosphere is feasible, preventing future warming requires stopping the emissions of greenhouse gases. The most ambitious effort to forestall warming thus far is the Paris Agreement. This nonbinding international treaty, entered into force in November 2016, aims to keep warming "well below 2 degrees Celsius above pre-industrial levels and to pursue efforts to limit the temperature increase even further to 1.5 degrees Celsius," according to the United Nations. Each signatory to the treaty agreed to set their own voluntary emissions limits and to make them stricter over time. Climate scientists said that the emissions limits committed under the agreement wouldn't keep warming as low as 1.5 or even 2 degrees C, but that it would be an improvement over the "business-as-usual" scenario.

Under the Obama administration, the United States pledged to limit greenhouse emissions to less than 28% of 2005 levels by 2025. However, President Donald Trump announced soon after his election that his administration would not honor the Paris Agreement. The Trump administration began the formal withdrawal process from the agreement in 2019.

Several state and local governments have launched their own efforts to combat climate change. For instance, 24 states and Puerto Rico have joined the U.S. Climate Alliance, pledging to meet goals set under the Paris Agreement.

"The federal government, even when it's operating well, is not the most nimble institution," Dello said. "But states and cities are a little more flexible."