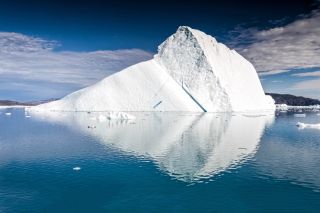 A massive iceberg floats on its side in Greenland.
(Image: © Shutterstock)

Antarctica and Greenland are losing ice six times faster than in the 1990s, a pair of studies in the journal Nature show.

According to the international team of climatologists behind the research, the unprecedented rate of melt has already contributed 0.7 inches (1.78 centimeters) to global sea level rise in the last three decades, putting the planet on track for the worst-case climate warming scenario laid out in the Intergovernmental Panel on Climate Change's (IPCC) latest report. The dreaded scenario, which predicts a total sea level rise of 23.6 inches (60 cm) by the year 2100, would put hundreds of millions of people living in coastal communities at risk of losing their homes — or their lives — to flooding.

"Every centimeter of sea level rise leads to coastal flooding and coastal erosion, disrupting people's lives around the planet," study author Andrew Shepherd, a professor of Earth Observation at the University of Leeds in England, said in a statement. "If Antarctica and Greenland continue to track the worst-case climate warming scenario, they will cause an extra 6.7 inches (17 cm) of sea level rise by the end of the century."

"This would mean 400 million people are at risk of annual coastal flooding by 2100," Shepherd added.

For the new studies, a team of 89 scientists assessed ice loss data from 11 satellites that have been monitoring Antarctica and Greenland since the early 1990s. The data created a detailed picture of how much mass each region's glaciers have lost over the last 30 years, and showed how quickly the remaining ice is flowing into the sea.

The team found that Greenland and Antarctica have lost a combined 7 trillion tons of ice (6.4 trillion metric tons) from 1992 to 2017. Almost all of the lost ice in Antarctica and about half of the lost ice in Greenland is due to warming ocean waters melting the edges of glaciers, causing each region's ice sheets to flow more quickly toward the sea. The rest of Greenland's ice loss is due to warming air temperatures, which melt the ice sheets at their surfaces, the researchers said.

This sixfold increase in the rate of ice loss means that the melting polar ice sheets are responsible for a third of all sea level rise, the researchers said. (Thermal expansion, which causes water to take up more space as it warms, is responsible for much of the remaining sea level rise.)

The accelerated ice loss puts the planet well on the way toward the IPCC's worst-case scenario.