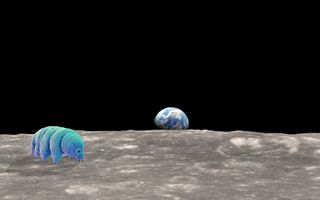 The world saw plenty of sad, angry and downright catastrophic news this year. But a river of heartwarming, amazing discoveries also flooded in this year, from tardigrades on the moon (lunar water bears?!) to jewel-like lakes under Greenland to a trippy wonderland of hydrothermal vents. Here’s a look at the gems science turned up in 2019.

How we got showered in gold

Astronomers this year calculated that a single merger between two neutron stars could have showered our solar system with millions of pounds of precious metals like gold and platinum. It would have happened about 100 million years before the solar system formed during a collision of the ultradense corpses of giant stars that ended their lives in explosive events. The merger, they estimated, happened about 1,000 light-years from us. And if you’re wearing a gold or platinum ring, you carry a bit of this explosive past on your hand, the researchers said.

Thousands of tardigrades landed on the moon this year. These were not astronaut-suit-wearing water bears, however. Rather, the microscopic beasties crashed onto the surface during a failed landing attempt on April 11 by the Israel spacecraft called Beresheet. The tardigrades were in a tun state, meaning they were dehydrated, with metabolic activity suspended. While the tardigrades may have survived the crash landing, they’d need water to come back to life, so there’s little chance of tardigrades colonizing our moon — but picturing the chubby guys roaming around is a cheery thought.

As if Dr. Seuss created this undersea wonderland, deep in the Gulf of California lies a fantastical expanse of hydrothermal vents, scientists discovered this year. They found glimmering pools of piping-hot fluids, rainbow-hued life-forms and towering mineral structures rising some 75 feet (23 meters) from the seafloor. The researchers who discovered the system said that it seems to have built up over the past 10 years as hydrothermal venting, where mineral-laden water jets out from the seafloor, ramped up. Speaking about the discovery in April, team leader Mandy Joye of the University of Georgia said: "Astonishing is not strong enough of a word."

An epic slow-motion video released this year revealed some crazy acrobatics in the wild. In a feat that would put Bruce Lee to shame, a kangaroo rat — Ninja Rat — drop-kicks a deadly rattlesnake in a blindingly fast motion. In fact, the researchers studying these videos found that kangaroo rats could react to a snake attack in as little as 38 milliseconds. In some instances, they would leap clear of the snake in just 70 milliseconds.

One may not be able to help but smile a this baby T. rex covered in fluff. RAWR! The tyrannical beast wasn’t always so formidable; T. rex hatchlings broke from their egg at about turkey-size, though skinnier and covered in a coat of downy feathers, according to reconstructions that represent the most accurate models of what the dinosaur would have looked like. This fluffball and other dino surprises were unveiled in March at the exhibit "T. rex: The Ultimate Predator," which opened at the American Museum of Natural History (AMNH) in New York City.

For the first time ever, scientists recorded the heartbeat of the world's largest creature to ever liver: the blue whale. And it turns out, the behemoth can survive on just two heartbeats a minute. The researchers suction-cupped a pulse monitor to the back of a blue whale off California and then proceeded to watch the beast dive and resurface over 9 hours. During these meal-searching dives, the whale's heart pumped as many as 34 times per minute at the surface and as few as just two at the deepest depths. Did your heart skip a beat?

Just about everything found in Antarctica is pretty amazing. This year's discovery of a huge lake of sizzling hot lava there was no exception. On a remote sub-Antarctic island in the South Atlantic Ocean, scientists discovered what is now only the eighth lake of molten rock ever identified. They found this bubbling cauldron of sorts inside the crater of the volcano Mount Michael on Saunders Island. The molten rock, which rises between 300 and 700 feet (90 and 215 meters), reaches a whopping 1,812 to 2,334 degrees Fahrenheit (989 to 1,279 degrees Celsius), the researchers found.

The elusive, giant squid generally comes out of hiding only after the creature is dead and washes up on some beach. That's what made this year's "catch" so exciting: Scientists captured video of the eight-legged creature, in the genus Architeuthis, deep in the Gulf of Mexico, revealing the graceful creature as it approaches blinking lights on a decoy crafted to look like a bioluminescent jellyfish. The encounter is a fast one: As soon as the squid realizes the lights are coming from a non-jellyfish object, it darts away. But it did stay long enough to reveal the awe and wonder of the deep sea.

The gorgeous and befuddling Hoag's Object

Perhaps one of the most gorgeous, and befuddling, objects in the cosmos, this galaxy within a galaxy within a galaxy slithers through the northern sky. A stunning image captured by the Hubble Space Telescope and processed by geophysicist Benoit Blanco this year shows Hoag's Object — which spans 100,000 light-years across — glistening in the serpent constellation, with a billions of blue stars forming a perfect circle around a much smaller and denser orb of reddish stars; that's not all, lurking in the gap between these star circles is another ring galaxy that's much farther away from us.

What if physicists could both peek at the enigmatic Schrödinger's Cat while also keeping the famous feline alive? That's just what physicists sort of figured out this year after studying the feline-based thought experiment in which an unlucky, imaginary cat is both alive and dead inside a box (in a state of superposition in terms of quantum particles). Once the owner looks inside the box, that cat's fate is sealed, so the idea goes. In a new study, scientists figure out an ingenious way to separate that initial interaction (peeking at the cat) from the result (knowing whether it's alive or dead). Keeping a furry four-legged creature alive, one that seemed doomed to living in the unknown, is pretty amazing. Plus, it advances "scientists' understanding of one of the most fundamental paradoxes in physics," Live Science reported in November.

Diamond inside a diamond

This is not your average diamond. Scientists declared this year that a diamond extracted from a mine in Yakutia, Russia, was holding a sparkly surprise: another diamond. The smaller diamond was rattling around in an air pocket at the center of the larger stone, Russian experts who examined the gemstones said. The diamond-in-a-diamond is estimated to be about 800 million years old.

In fact, it's now considered the only known examples of such a dynamic duo. "I have no knowledge of anything like this in the natural mineral world," George Harlow, a curator in the Department of Earth and Planetary Sciences at the American Museum of Natural History in New York City, told Live Science in an email.

There are gems under Greenland's ice sheet. Though not actual gemstones, 56 sparkly blue, oddly shaped lakes were discovered this year. The discovery brings the known subglacial lakes in Greenland to 60. The lakes range from tiny — just 656 feet (200 meters) long — to enormous — stretching some 3.6 miles (5.9 kilometers) in length. And life could be hiding in this under-ice bodies of water, the extreme kind.

"These lakes could provide important targets for direct exploration to look for evidence of extreme life," study co-researcher Stephen Livingstone, a senior lecturer in physical geography at the University of Sheffield in the United Kingdom, said in a statement.