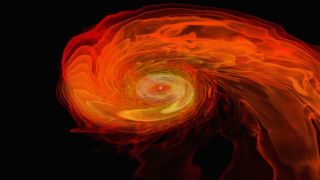 Two neutron stars rip each other apart to form a black hole in this NASA simulation. New research suggests that a stellar collision like this occurred very close to our solar system some 4.6 billion years ago, showering our cosmic neighborhood with many of the heavy elements crucial to life.
(Image: © NASA Goddard)

Two astronomers think they've pinpointed the ancient stellar collision that gave our solar system its cache of precious gold and platinum — some of it, anyway.

In a new study published May 1 in the journal Nature, the duo analyzed the remnants of radioactive isotopes, or versions of molecules with different numbers of neutrons, in a very old meteorite. Then, they compared those values with isotope ratios produced by a computer simulation of neutron star mergers — cataclysmic stellar collisions that can cause ripples in the fabric of space-time. [15 Unforgettable Images of Stars]

The researchers found that a single neutron star collision, starting about 100 million years before our solar system formed and located 1,000 light-years away, may have provided our cosmic neighborhood many of the elements heavier than iron, which has 26 protons. This includes about 70% of our early solar system's curium atoms and 40% of its plutonium atoms, plus many millions of pounds of precious metals like gold and platinum. In total, this single ancient star crash may have given our solar system 0.3% of all its heavy elements, the researchers found — and we carry some of them around with us every day.

He added that, if you wear a gold or platinum wedding ring, you're also wearing a bit of the explosive cosmic past. "About 10 milligrams [0.00035 ounces] of it likely formed 4.6 billion years ago," Bartos said.

There's gold in them thar stars

How does a star make a wedding ring? It takes an epic cosmic explosion (and a few billion years of patience).

Elements like plutonium, gold, platinum and others heavier than iron are created in a process called rapid neutron capture (also called the r-process), in which an atomic nucleus quickly gloms on to a bunch of free neutrons before the nucleus has time to radioactively decay. This process occurs only as a result of the universe's most extreme events — in stellar explosions called supernovas or colliding neutron stars — but scientists disagree about which of those two phenomena is chiefly responsible for the production of heavy elements in the universe.

In their new study, Bartos and his colleague Szabolcs Marka (of Columbia University in New York) make an argument for neutron stars being the predominant source of heavy elements in the solar system. To do so, they compared the radioactive elements preserved in an ancient meteorite with numerical simulations of neutron star mergers at various points in space-time around the Milky Way.

"The meteor contained the remnant of radioactive isotopes produced by neutron star mergers," Bartos told Live Science in an email. "While they decayed a long time ago, they could be used to reconstruct the amount of the original radioactive isotope at the time when the solar system was formed."

The meteorite in question contained decayed isotopes of plutonium , uranium and curium atoms, which the authors of a 2016 study in the journal Science Advances used to estimate the amounts of these elements present in the early solar system. Bartos and Marka plugged those values into a computer model to figure out how many neutron star mergers it would take to fill the solar system with the correct amounts of those elements.

It turns out that a single neutron star merger would do the trick, if it happened close enough to our solar system — within 1,000 light-years, or about 1% of the diameter of the Milky Way.

Neutron star mergers are thought to be pretty rare in our galaxy, occurring only a few times every million years, the researchers wrote. Supernovas, on the other hand, are much more common; according to a 2006 study from the European Space Agency, a massive star explodes in our galaxy once every 50 years or so.

That supernova rate is much too high to account for the levels of heavy elements observed in early solar system meteors, Bartos and Marka concluded, ruling them out as the likely source of those elements. A single nearby neutron star merger, however, fits the story perfectly.

According to Bartos, these results "shed bright light" on the explosive events that helped make our solar system what it is.