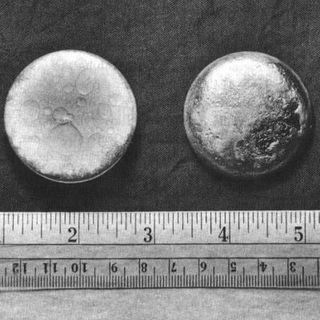 These buttons of refined plutonium metal were used in the core of the Fat Man bomb dropped on Nagasaki.
(Image: © U.S. Department of Energy)

Plutonium is a radioactive, silver metal that can be used to create or destroy. While it was used for destruction soon after it was made, today the element is used mostly for creating energy throughout the world.

Plutonium was first produced and isolated in 1940 and was used to make the "Fat Man" atomic bomb that was dropped on Nagasaki at the end of World War II, just five years after it was first produced, said Amanda Simson, an assistant professor of chemical engineering at the University of New Haven.

Here are the properties of plutonium, according to the Los Alamos National Laboratory:

Plutonium was discovered in 1941 by scientists Joseph W. Kennedy, Glenn T. Seaborg, Edward M. McMillan and Arthur C. Wohl at the University of California, Berkley. The discovery occurred when the team bombarded uranium-238 with deuterons that had been accelerated in a cyclotron device, which created neptunium-238 and two free neutrons. The neptunium-238 then decayed into plutonium-238 through beta decay.

This experiment wasn't shared with the rest of the scientific community until 1946, after World War II. Seaborg submitted a paper on their discovery to the journal Physical Review in March 1941, but the paper was removed when it was discovered that an isotope of plutonium, Pu-239, may be used to create an atomic bomb.

Soon, Seaborg was sent to lead the Plutonium Production Lab, also known as the Met Lab, at the University of Chicago, according to the Los Alamos National Laboratory. The purpose of the lab was to create plutonium as part of the Manhattan Project. The Manhattan Project was a secret venture during World War II that worked exclusively to develop an atomic bomb.

On August 18, 1942, they had their first big success. They were able to create a trace quantity of plutonium that was visible to the eye. It equaled only around 1 microgram. From the tiny sample, scientist determined plutonium's atomic weight.

The Manhattan Project eventually produced enough plutonium for the "Trinity Test." During the test, the world's first atomic bomb, or the "The Gadget," was exploded near Socorro, New Mexico, on July 16, 1945, by Los Alamos Laboratory director Robert Oppenheimer and Army General Leslie Groves.

Of the test, Oppenheimer said, "We knew the world would not be the same. A few people laughed, a few people cried. Most people were silent. I remembered the line from the Hindu scripture, the Bhagavad-Gita. Vishnu is trying to persuade the Prince that he should do his duty and to impress him takes on his multi-armed form and says, 'Now I am become Death, the destroyer of worlds.' I suppose we all thought that, one way or another," according to the Royal Society of Chemistry.

The explosion had the energy equivalent of approximately 20,000 tons of TNT. The first war-use atomic bomb dropped on Hiroshima, Japan, on August 6, 1945. That atomic bomb, dubbed "Little Boy," had a uranium core, though. The second bomb, dropped on Nagasaki, Japan, in August 9, 1945, had a plutonium core. The "Fat Man," as it was called, hastened the end of World War II.

Freshly prepared plutonium metal has a silvery bright color but takes on a dull gray, yellow, or olive green tarnish when oxidized in air. The metal quickly dissolves in concentrated mineral acids. A large piece of plutonium feels warm to the touch because of the energy given off by alpha decay; larger pieces can produce enough heat to boil water. At room temperature alpha-form plutonium (the most common form) is as hard and brittle as cast iron. It can be alloyed with other metals to form the room-temperature stabilized delta form, which is soft and ductile. Unlike most metals, plutonium is not a good conductor of heat or electricity. It has a low melting point and an unusually high boiling point.

Plutonium can form alloys and intermediate compounds with most other metals, and compounds with a variety of other elements. Some alloys have superconductive abilities and others are used to make nuclear fuel pellets. Its compounds come in a variety of colors, depending on the oxidation state and how complex various ligands are. In aqueous solution there are five valance ionic states.

Plutonium, along with all of the other transuranium elements, is a radiological hazard and must be handled with specialized equipment and precautions. Animal studies have found that a few milligrams of plutonium per kilogram of tissue are lethal.

Plutonium generally isn't found in nature. Trace elements of plutonium are found in naturally occurring uranium ores. Here, it is formed in a way similar to neptunium: by irradiation of natural uranium with neutrons followed by beta decay.

Primarily, however, plutonium is a byproduct of the nuclear power industry. Each year, around 20 tons of plutonium is produced, according to the Los Alamos National Laboratory. Spent nuclear fuel can also be reprocessed to separate usable plutonium from other elements in the fuel.

Atmospheric weapons testing in the 1950s and 1960s left tons of plutonium in the Earth's atmosphere that is still there today, according to the World Nuclear Association.

Plutonium-238 is used to make electricity for space probes using radioisotope thermoelectric generators. These generators are switched on when the probes can't get enough solar power because they have traveled too far away from the sun. Some probes that use plutonium-238 are Cassini and Galileo.

When concentrated enough, plutonium-239 undergoes a fission chain reaction. Because of this, it is used in nuclear weapons and some nuclear reactors.

In fact, one of the biggest uses for plutonium is energy. According to the World Nuclear Association, over one-third of the energy produced in most nuclear power plants comes from plutonium. Plutonium is the main fuel in fast neutron reactors.

For decades, scientists wondered why plutonium didn't act like other metals in its group. For instance, plutonium is a poor conductor of electricity and it doesn't stick to magnets. Now researchers have figured out where its "missing magnetism" has been hiding out and it has to do with the wacky behavior of the electrons in the element's outer shell. Unlike other metals, which have a set number of electrons in their outer shells, when in a ground state, plutonium can have four, five or six electrons there.

This fluctuating number of outer-shell electrons explains why plutonium isn't magnetic: In order for an atom to interact with magnets the unpaired electrons in its outer shell must line up in a magnetic field. [Read more about plutonium's missing magnetism]

Plutonium's most stable isotope, plutonium-244, can last a long time. It has a half-life of about 82 million years and decays into uranium-240 through alpha decay, according to the Jefferson Lab.