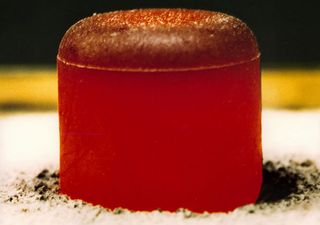 Plutonium is a metal, but it won't stick to a magnet, puzzling scientists for decades. Now researchers may have found this "missing magnetism."

The hideout? Electrons that surround every atom of plutonium, finds the group, led by Marc Janoschek of Los Alamos National Laboratory.

The finding, they say, could lead to the ability to predict and tune the properties of new materials more precisely. [Elementary, My Dear: 8 Elements You Never Heard Of]

Electrons spin around atoms in shells, also known as orbitals. Each orbital has a certain maximum number of electrons it can hold. In ordinary metals the number of electrons in the outermost orbital is fixed — copper, for example, has one electron, and iron has two in that outer shell. Absent any other energy added to the atom (heat or electricity, for example) the electrons are in a lowest-energy state, called a ground state.

To figure out what plutonium's electrons looked like in this ground state, Janoschek's team fired a beam of neutrons at a plutonium sample. The neutrons and electrons both have magnetic fields, and those fields have magnetic moments. A magnetic moment refers to the amount and direction of the force needed to align an object in a magnetic field. As the neutrons' and electrons' moments interacted, Janoschek's team observed a kind of signature of the electrons' ground states, which revealed the number of electrons in the outer shell.

That's when they found plutonium could have four, five or six electrons in the outer shell in the ground state. Scientists who were trying to explain the element's odd properties previously had assumed the number was fixed.

But that's not what the new study showed. "It fluctuates between the three different configurations," Janoschek said. "It is in all three at the same time."

The theoretical basis for this strange state of affairs was laid in 2007, when physicists at Rutgers University developed a new mathematical tool that assumed plutonium's electrons could fluctuate in this way. The Los Alamos experiment is the first test of the theory, and it has proven correct.

This fluctuation can explain why plutonium isn't magnetic. Magnets get their sticking power from unpaired electrons. Each electron is like a tiny magnet with a north and a south pole. When electrons fill an atom's shells, they each take their place singly, and the magnetic moments point in the same direction. As more electrons fill the shell, they pair up with the north and south poles each facing each other so that the magnetic fields cancel out. But sometimes an electron can't find a partner. For instance, when iron is put in a magnetic field the unpaired electrons all line up the same way, creating an aggregate magnetic field and attracting other magnets. [9 Cool Facts About Magnets]

Because the number of electrons in plutonium's outer shell keeps changing, the unpaired electrons will never line up in a magnetic field and so plutonium can't become magnetic.

Janoschek said plutonium's properties place the element between two sets of elements on the periodic table. "Look at thorium to uranium and neptunium — they behave like transition metals, they get more metallic" he said. As you move to heavier elements (to the right on the periodic table), that changes. "When you get to americium and beyond that they look like rare earths." Rare earths like neodymium make very good magnets, while transition metals often don't.

The experiment did more than just notch another weird property of plutonium. The mathematical technique in the experiment along with the discovery of plutonium's weird electrons could help scientists predict how new materials might behave. Up until now the only way to pin down this behavior was to do experiments like heating them up or hitting them with electricity or magnetic fields. Now there's a way to know beforehand.

"A predictive theory of materials is a big deal because we eventually will be able to simulate and predict properties of materials on a computer," said Gabriel Kotliar, a professor of physics at Rutgers and one of the scientists who first worked out the mathematics. "For radioactive materials like plutonium, that's a lot cheaper than doing an actual experiment."

It also helps explain another odd property of plutonium — the element expands and contracts a lot more than other metals do when heated or zapped with an electric current. That's important to making nuclear bombs, since the plutonium has to be shaped precisely. Engineers long ago learned to account for that shape change, but now they know why it happens.

The study is published in today's (July 10) issue of Science Advances.