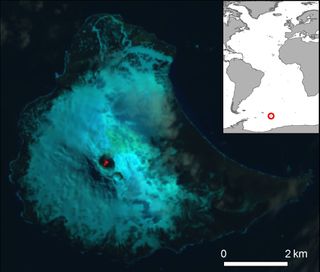 This false-color satellite photograph of Mount Michael shows the lava lake (in red) within the volcano – only the eighth persistent lake of molten rock ever discovered. The inset shows the location of Saunders Island.
(Image: © Landsat 8/British Antarctic Survey)

A huge lake of sizzling hot lava has been discovered in a volcano on a remote sub-Antarctic island in the South Atlantic Ocean. It's only the eighth lake of molten rock ever discovered on Earth.

Scientists from University College London (UCL) and the British Antarctic Survey (BAS) discovered this rare lava lake on Saunders Island in the South Sandwich Islands, about 1,000 miles (1,610 kilometers) north of the eastern edge of Antarctica's Weddell Sea. [See Photos of Another Lava Lake in Antarctica]

By looking at satellite images of the uninhabited island between 2003 and 2018, the researchers found that the snow-covered volcano of Mount Michael on Saunders Island, usually cloaked from view by heavy clouds, contains a lake of lava within its crater, between 300 and 700 feet (90 and 215 meters) in diameter.

Saunders Island is part of a remote volcanic chain known as the South Sandwich Islands. They are grouped with the sub-Antarctic island of South Georgia and designated as a British Overseas Territory.

The island and volcanic mountain were "extremely difficult to access, and without high-resolution satellite imagery it would have been very challenging to learn more about this amazing geological feature," lead author of the new research, UCL geographer Danielle Gray, said in a statement.

Although bubbling lakes of lava are a common image linked to volcanoes, only seven have been found before, said BAS geologist Alex Burton-Johnson, a co-author of the new research. [10 Most Hazardous Countries For Volcanoes (Photos)]

Scientists had known about a temperature anomaly over the volcano on Saunders Island for several years, but a BAS study of satellite pictures in 2001 wasn't able to determine what caused it, Burton-Johnson told Live Science.

Because the island is so remote, very few researchers have ever been to Mount Michael. "It has been visited at the bottom very rarely, and no one has ever got to the summit."

But the latest study used high-resolution satellite photographs of the mountain, taken in wavelengths of light designed to highlight any geothermal activity. Those photographs showed conclusively that the crater of Mount Michael contains a lake of molten rock, he said, although the researchers haven't been able to determine how far it lies below the rim of the volcano.

While many volcanoes throw out lava when they erupt and form temporary pools and lakes of molten rock, these usually dry into solid rock within a few days or weeks, he said.

The other seven persistent lakes of lava are: the volcanoes of Nyiragongo in the Democratic Republic of Congo; Erta Ale in Ethiopia; Mount Erebus beside the Ross Sea in Antarctica; Mount Yasur in Vanuatu; the volcanic island of Ambrym in Vanuatu; Kilauea in Hawaii; and the Masaya caldera in Nicaragua.

Geologists were initially puzzled as to why lava from deep within the Earth dries into rock around most of the 1,500 or so volcanoes on Earth but stays liquid in just a few places, Burton-Johnson said. [Antarctica Photos: Meltwater Lake Hidden Beneath the Ice]

They later determined that the heat from eruptions of volcanic gases, such as steam, sulfur dioxide and carbon dioxide, could keep some lava lakes at a high enough temperature to keep them molten, he said.

That appears to be the case on Mount Michael on Saunders Island, which has contained a persistent lake of lava since at least 2003, and probably longer.

Burton-Johnson said the next step would be for someone to fly an aircraft or an aerial drone over the crater of Mount Michael to take photographs of the lava lake, but that could take years to arrange.

"The problem is that the South Sandwich Islands are so incredibly remote, there is very little ship traffic that goes past there," he said. "So there are not a huge amount of opportunities for research vessels in that area."

Their research is published in the latest issue of the journal Volcanology and Geothermal Research.