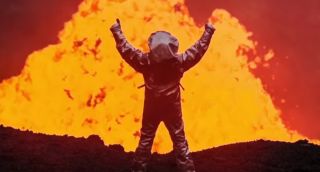 In a new video, a man in a silvery, heat-resistant suit walks perilously close to a bubbling, churning lava lake. The scene is set with stunning aerial shots of the volcanic crater and close-ups of the glowing orange molten rock, all captured with the help of tiny recreational drones.

Getting the footage was no easy feat. The toxic gases corroded the electronics in the drones, and the bubbling lava created its own deadly weather systems. And, not surprisingly, being near a lava lake is very, very hot.

"The drone was not able to get nearly as close to lava as I did because it literally would have melted into a soup," said Sam Cossman, the filmmaker and entrepreneur who created the video. [Photos from Above: 8 Cool Camera-Carrying Drones]

Once in a lifetime

Cossman, who used to run a tech startup that provides people with once-in-a-lifetime adventures, found a video online of a bubbling lava lake on the remote Pacific island of Ambrym, part of the nation of Vanuatu.

"I almost didn't think it was real, and I wanted to see it for myself," Cossman told Live Science.

Last year, he posted a video, called Volcano Diver, that was taken with a mounted GoPro camera. The video showed him descending 1,200 feet (366 meters) to stand at the rim of the Marum crater, with a forbidding lava lake below. After the video went viral, he decided to return with California Institute of Technology astrobiologist Jeffrey Marlow, to do a more systematic exploration of the lake. The goal was to create a 3D map of the lake and sample its toxic soil to understand how life survives in such extreme sulfur-saturated conditions.

But, in some ways, getting good drone footage was more challenging than getting close to the rim in person, Cossman said. The volcano creates its own weather system, with a near-perpetual storm of acidic rain.

"The rain is pretty much the same pH as battery acid," Cossman said.

The billowing plumes of bone-charring, superheated air are laden with toxic and corrosive gases. All told, the scientists had to wait a month before they could get footage that wasn't completely blocked by this volcanic gas.

In addition, the particulate matter that spews into the air forms current, or streams of charged particles. This created lightning at the top of the volcano that regularly interfered with the radio signals from the drone, Cossman said.

To ensure good drone footage, Cossman recruited an experienced drone pilot to direct the recreational drones to take shots pointing from above, around the crater, as well as some footage from inside the crater. To prevent the drone from melting due to radiant heat (heat transferred by electromagnetic waves), the team had to make sure the drone was completely out of the path of the heat waves emanating from the lava.

"If you're not maintaining a direct line of sight with the lava, the temperature falls off exponentially — it's not nearly as hot," Cossman said.

In addition, the lava lake, which measures about 7.4 miles (12 kilometers) across, is huge, which meant the tiny drones, which only have 20 to 30 minutes of battery life, had to burn through several sets of batteries to capture the whole area.

Even so, the drones still suffered extreme damage. "Two of three drones have floated up to drone heaven — or 'drone hell,' I guess I should say," Cossman said.

The two videos have been seen by millions of people, but the team also had a secondary, scientific goal: By using drones, the team can program the robotic fliers to take the same routes and footage over time, thereby providing a more rigorous way to document changes in the lava lake, Cossman said.

The team also has submitted some of the soil samples from the volcanic rim to NASA's Jet Propulsion Laboratory in California, where they will be used to test the SHERLOC instrument that will be aboard a new Mars rover scheduled to launch in 2020. SHERLOC (short for "Scanning Habitable Environments with Raman & Luminescence for Organics and Chemicals") uses ultraviolet light to identify chemical signatures of past life, and because the volcanic samples may be somewhat similar to the barren surface of Mars, the samples could provide a good testing ground for SHERLOC, Cossman said.