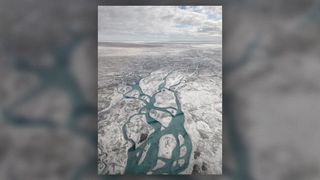 Hidden beneath Greenland's Ice Sheet like an enormous necklace of sparkly blue and oddly shaped beads, scientists have discovered 56 previously unknown and gem-like lakes. This brings the total number of known subglacial lakes there to 60, the researchers said.

Greenland isn't alone in housing hidden lakes; Antarctica also has them, although the southern continent's lakes tend to be larger than the ones in Greenland.

Some of Greenland's subglacial lakes are quite tiny. A few are just 656 feet (200 meters) long, while others stretch 3.6 miles (5.9 kilometers) in length, the researchers found. [Stunning Photos of Greenland's Supraglacial Lakes]

"The lakes we have identified tend to cluster in eastern Greenland, where the bed is rough and can therefore readily trap and store meltwater, and in northern Greenland," study co-researcher Stephen Livingstone, a senior lecturer in physical geography at the University of Sheffield in the United Kingdom, said in a statement.

The lakes are chilling out under the Greenland Ice Sheet, which is about seven times the size of the United Kingdom. The sheet is 1.8 miles (3 km) thick in some places and plays a key role in rising sea levels.

Sometimes giant ice sheets develop subglacial lakes because heat pops up in weird places. For instance, the heat can be generated by the flow of ice, geothermal energy deep in the ground or water from the surface that drains through the sheet's cracks. Then, this meltwater can become trapped in depressions, forming subglacial lakes.

By mapping these lakes, researchers can learn where ice melts and drains under the ice sheet, which influences how the icy block responds to rising temperatures caused by human-made climate change.

Researchers found most of this necklace of lakes by analyzing radio echo sounding data, which creates a snapshot of the bed beneath the Greenland Ice Sheet. Most of the lakes were found under slow-moving ice, they noted.

"This study has for the first time allowed us to start to build up a picture of where lakes form under the Greenland Ice Sheet," study lead researcher Jade Bowling, an associate lecturer at the Lancaster Environment Centre at Lancaster University in the United Kingdom, said in a statement.

However, Greenland's lakes may change as the climate continues to heat up. For example, meltwater on the surface may form lakes and streams at higher elevations on the ice sheet, and these could drain to form more active subglacial lakes that regularly or seasonally fluctuate in size, the researchers said.

Whatever happens, the researchers are excited to learn more about these bodies of water.

"These lakes could provide important targets for direct exploration to look for evidence of extreme life," Livingstone said. Sampling sediments from these lakes may also reveal "a record of environmental change," he said.

The study was published online yesterday (June 26) in the journal Nature Communications.