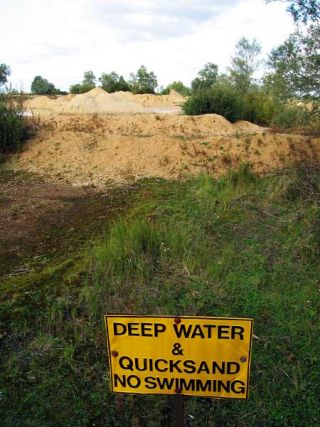 Falling into quicksand isn't quite as bad as some movies make it out to be.

Instead of being sucked all the way in, quicksand victims will float once they get about waist deep, according to a new study.

Yet while the risk of vanishing has apparently evaporated, escaping the muck is still a tough task: To pull one leg free requires the amount of force needed to lift a small car. There are tricks, however.

Quicksand is a mixture of fine sand, clay and saltwater. Once perturbed, the mixture transforms from a loose packing of sand on top of water into a dense, liquid soup. Movement by a victim makes things worse.

"The higher the stress, the more liquid the quicksand becomes, so movement by a trapped body causes it to sink in deeply," study leader Daniel Bonn of the University of Amsterdam writes in the Sept. 29 issue of the journal Nature.

After the mix liquefies, the quicksand splits into a water-rich phase and a sand-rich one. The wet sand sediment becomes so densely packed that it's harder to move than cold molasses. Once the victim's foot becomes stuck in it, the situation is dire.

"If you move into the quicksand, this loose packing will collapse," Bonn told LiveScience. "We then have densely packed sand at the bottom, and water floating on top of it. It's the difficulty of getting water into this very densely packed sand that makes it difficult for you to pull your foot out."

Bonn and his colleagues found, however, that if a you remain calm, you can actually float your way to safety.

The researchers simulated a quicksand pit in the lab and placed an aluminum ball of greater density than the quicksand on top of the pit. The ball didn't sink until the researchers began to shake the pit, simulating movement and turning the mixture of sand and water more liquid. When they did this, the ball sank right to the bottom.

But when they used an aluminum ball with a density equal to the human body, which is less than the density of quicksand, they found it impossible to sink the ball, no matter how hard they shook the pit.

The advice : Stay calm and eventually you'll float. Stretch out on your back to increase your surface area and wait until your legs pop free. Bonn also suggests moving your legs around at this point, to stir in water, which will help you float.

"You have to introduce water into the sand," Bonn said. "And the easiest way to do that is to make it trickle along your leg into the quicksand, by making a circular motion with your leg."