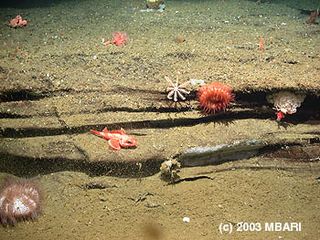 Sandy beaches are plentiful along the California coast, but not many are found below the ocean. Scientists just added three to the list.

What were once volcanic islands off the coast of California now sit at the bottom of sea.

With the help of a robotic submersible, a team of researchers captured images of long sunk sandy beaches at depths exceeding 2,000 feet (610 meters). The video images and rock samples taken from ocean bottom indicate that beaches were associated with volcanoes that used to poke above the surface.

Map shows three seamounts that appear to have been volcanic islands between 10 and 14 million years ago. Credit: MBARI

"They were probably islands for a million years or less and have been submerged for about the last 10 to 14 million years," Clague told LiveScience, adding that his team hasn't yet finished dating all of the samples hauled up below.

Clague's team found the remnants of sandy beaches on the Rodriguez Seamount, the San Juan Seamount and the Northeast Bank, each about 180 miles (300 kilometers) off the coast of Los Angeles. The images were collected from eleven Tiburon dives in October 2003 and April 2004 and were presented at the American Geophysical Union 2004 Fall Meeting last month.

Seamounts are formed when undersea volcanoes erupt and lava flows build up over time. The load of the volcano causes the earth around it to flex - similar to how a board between two blocks would flex if you stand on it - and this force causes the volcano to eventually sink until it settles.

This type of sinking behavior has been well studied in Hawaii, where some of the islands have dropped by as much as 3,280 feet (1,000 meters) since they were first formed.

Image from the ROV Tiburon show deep-sea beach sand and lava that appears to have been sculpted by waves -- along a shore now nearly a half-mile (680 meters) below the surface.

Sometimes sandy deposits can be caused by the movements of glaciers during eras of low sea level. Clague and his team say that the depths at which these seamounts occur - each over a third of a mile below sea level - glacial activity cannot be the explanation for these sandy deposits. Additionally, chemical and mineralogical tests performed by the team on the many rock samples from the seamounts suggest that the rocks had been exposed to air - this would only be possible if the volcano had erupted above water.

"When a volcano erupts in the air, the lava actually oxidizes. Iron in the rock combines with Oxygen in the air and makes reddish minerals," said Clague, adding that some of the rocks his team has brought up were clearly sculpted by waves and showed hydrodynamic shapes created from grinding sands.

Earlier explorations of a different group of seamounts off central California did not reveal these telltale features. Although the central California seamounts are larger, the water is much deeper there and these seamounts were probably never exposed to air, even before they began to sink, explained Clague.

Seamounts are gaining more interest as biological hotspots, and Tiburon's images revealed a rich array of colorful deep-sea marine-life around the seamounts, including corals and sponges. Additionally, seamounts create swirling currents that carry nutrients from the sea floor to shallower waters where fish can feed on them.

These schools of fish draw the attention of larger predators, like tuna and whales, as well as commercial fishermen.

Clague's team will now focus on why these seamounts are located where they are and why they have these peculiar shapes.

Like many organisms living on seamounts, this "mushroom coral" captures minute food particles that drift past on the ocean currents.