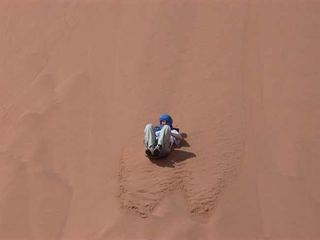 If you've never heard a sand dune rumble, listen up. Marco Polo in the 13th Century said the singing sands -- which he ascribed to evil desert spirits -- "at times fill the air with the sounds of all kinds of musical instruments, and also of drums and the clash of arms."

Yes, certain sand dunes will occasionally let out a loud, low-pitch rumble that lasts up to 15 minutes and can be heard up to 6 miles (10 kilometers) away. Some dunes are known to do it regularly, even daily. But why?

To try and uncover the underlying nature of these mysterious sounds, Bruno Andreotti from the University of Paris-7 took equipment out to the Atlantic Sahara in Morocco, one of only 35 known places where the mysterious natural music can be heard.

"Singing dunes constitute one of the most puzzling and impressive natural phenomenon I have ever encountered," Andreotti said.

Andreotti and his team studied one of the large crescent-shaped dunes, or barchans, which spontaneously sings all year long - sometimes two or three times an afternoon, if windy enough.

Wind forces sand to accumulate at the top of the dune until the angle of the slope reaches a tipping point of about 35 degrees. The eventual avalanche of sand produces the bellowing noise. The sand must be sufficiently dry for the singing to occur. For smaller barchans, the sand must also be hot and the wind still.

"A small dune sings only the few days in which there is no wind and no clouds so that the Sun can dry efficiently the slip face," Andreotti told LiveScience.

Although sand avalanches were known to be the cause of the singing, the exact mechanism was still unclear. Not wanting to wait for a spontaneous episode, Andreotti and his team induced avalanches in the field by sliding down the dunes.

By measuring vibrations in the sand and air, Andreotti was able to detect surface waves on the sand that emanated from the avalanche at a relatively slow speed of about 130 feet per second (40 meters per second). In this way, the face of the dune acts like a huge loudspeaker - with the waves on the surface producing the sound in the air.

Andreotti explained these sand waves as resulting from collisions that occur between grains at about 100 times per second, as measured in the lab. In a kind of feedback loop, the waves synchronize the collisions, so they are all on basically the same beat.

This model explains the low pitch - between 95 and 105 Hertz - of the sand song, which, according to Andreotti, resembles a drum or a low-flying propeller aircraft.

The feedback mechanism, as outlined by the researchers in the Dec. 1 issue of Physical Review Letters, also correctly predicts the maximum loudness of the singing to be 105 decibels, at which point the sand grains vibrate off the surface. This level of sound is comparable to a snow blower or a Walkman at full volume.

The mystery is not completely solved. Recent research has centered on a seemingly magical musical property of the singing grains. It is not known, for instance, why the sliding of glass beads is silent, while some rougher sand grains belt out a tune.