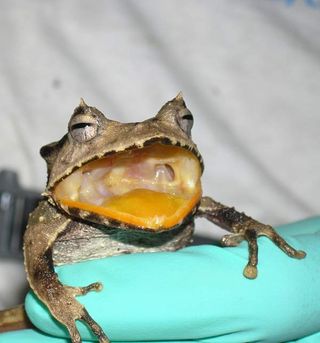 Panamanian marsupial frog, Hemiphractus fasciatus, getting "swabbed", or tested, for the presence of the microscopic fungal pathogen, Batrachochytrium dendrobatis, which is sweeping through Central America, decimating entire amphibian communities.
(Image: © A. Crawford)

Bats and frogs share a common plight. Fungi that appeared from nowhere are wiping out whole species of amphibians and more than a million bats just by attacking the skin.

And both plights may represent new disease paradigms for wildlife, according to researchers.

"It's taken awhile to really come to terms with how a fungus that infects the skin might be killing an animal," said Paul Cryan, a bat ecologist with the U.S. Geological Survey and the lead author of a study that finds echoes of amphibian chytrid-fungi infections in bats. "With bats and white-nose syndrome, I think we've followed in the footsteps of the chytrid researchers in sort of thinking about new possibilities of disease." [Image of bats with white-nose syndrome]

Signs of white-nose syndrome were first spotted in a cave near Albany, N.Y., in 2006, and the culprit, a cold-loving soil fungus called Geomyces destrucans, was identified about two years later.

It took much longer to identify the frog fungus — a type of water-dwelling chytrid — responsible for the mysterious amphibian declines. Discussion of the declines appears to have begun at the World Congress of Herpetology in 1989, while the fungal infection now blamed, chytridiomycosis, was first described in 1998, and the fungi that caused it was named and described a year later, according to Jamie Voyles, a postdoctoral researcher at the University of Idaho, who has studied the disease.

"We are used to finding pathogens that get into the body, replicate, and basically take over, like viruses or bacteria," said Vance Vredenburg of San Francisco State University, who also studies amphibians. The scientific community caught on much more quickly with white-nose syndrome, a sign that he said gives him hope.

The problem: Both fungi infect only the skin. But for these creatures, skin is more than just a covering. In amphibians, the skin plays a crucial role in exchanging gases, water and electrolytes, such as sodium, between the animal and its environment. In 2009, researchers led by Voyles reported that the superficial skin infection caused by the chytrid fungus disrupted the transport of electrolytes, leading to cardiac arrest and death among frogs.

Like its partner in crime, the white-nose syndrome fungus attacks the skin, in particular the wings, and bats' wings do more than just flap. In an article published Nov. 11 in the journal BMC Biology, Cryan and his colleagues suggest the fungus may kill bats by interfering with physiological processes that their wings carry out.

Infected wings resemble crumpled tissue paper as the fungus destroys the skin and its blood vessels, muscle fibers, glands and other components, they write. This infection could be causing a host of ultimately fatal problems, including dehydration, which leads bats to awaken during hibernation and deplete their stored fat; obstructed blood flow, which interferes with bats' ability to exchange gases through their wing membrane; the loss of body heat, and impaired flying ability, according to the authors. This disease, they said, could represent a new paradigm for how mammals die from diseases.

Out of the blue?

Both killer fungi also appeared to emerge out of nowhere. Chytrid fungi live in water and were not known to cause infections in vertebrates until one such species, Batrachochytrium dendrobatidis, often called Bd, was fingered for causing amphibian deaths. Meanwhile, G. destructans lives in soil and was first identified in 2008, as scientists sought to figure out what was killing the bats.

This is a bad sign, because it means neither fungi is dependent on its bat or frog hosts for survival, according to Arturo Casadevall, chairman of the department of microbiology and immunology at Albert Einstein College of Medicine in New York.

"Measles doesn't kill every human that it infects," Casadevall said, explaining that the measles virus needs to jump from human to human to survive. On the other hand, "G. destructans goes back into the soil. It doesn't care if there are bats around."

It's possible these fungi became killers by accident. While most pathogens have an evolutionary history with their host, like that between the measles virus and humans, the white-nose fungus and the chytrid fungus may have become virulent alone (without a host) and by chance.

For example, G. destructans' natural home, the soil, is a harsh place. In it, microbes face intense competition for nutrients, the threat of being eaten by amoeba, and shifting, extreme environmental conditions. As a result, they survive by adapting quickly, and these adaptations could, by chance, make them harmful to animals they encounter. This phenomenon is called accidental virulence, Casadevall explains in a review published in the journal Eukaryotic Cell in December of 2007.

White-nose syndrome has wiped out more than a million bats in North America, according to the U.S. Fish and Wildlife Service, and it is threatening the once-common little brown bat with extinction. However, in Europe, the fungus doesn't appear to kill the bats it infects, a puzzle that could yield important clues.

"The most likely hope these bats will have is individuals will survive the infection, and the populations will evolve resistance," Cryan said. But until this happens, researchers must continue working to understand how the infection kills the bats in the hopes of intervening, he said.

Many amphibians have already been wiped out. In 2007, a study published in the journal EcoHealth suggested that chytrid infections had caused the decline or extinction of up to roughly 200 species of frogs.

"The impact of chytridiomycosis on frogs is the most spectacular loss of vertebrate biodiversity due to disease in recorded history," wrote the authors.

And historically, it was believed that infectious disease could not cause extinctions, because as the population dropped, disease transmission would also decrease, Voyles said.

"Chytridiomycosis is probably the best empirical example that we know of to demonstrate disease-induced extinction," Voyles told LiveScience in an e-mail. Other examples of devastating disease exist, she wrote, "But in this sense, I think chytridiomycosis has led to a paradigm shift in how we view infectious diseases in wildlife."