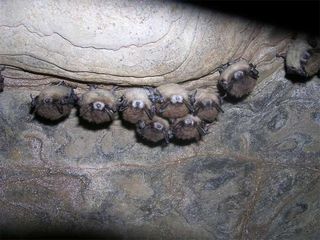 Little brown bats hang from a surface of a hibernation cave in New York. The bats' muzzles are covered with a white, powdery fungus.
(Image: © Nancy Heaslip, NY DEC.)

North America's most common bat, the little brown myotis, will be all but extinct in the northeastern United States in 16 years, thanks to a rapidly-spreading fungal infection, researchers reported Thursday.

The fungus, called white-nose syndrome, grows on the exposed skin of bats as they hibernate in cool caves or mines. The infection causes the bats to wake up from their slumber, depleting valuable fat stores and eventually killing them. If infection continues at current rates, the researchers reported in the journal Science, there is a 99-percent chance the little brown myotis population will drop below 0.01 percent of its current numbers by 2026.

"It's really scary stuff," said Sonia Altizer, an ecology professor at the University of Georgia, who was not involved in the study. "The little brown bat, which is the most common bat species in North America, is being decimated by a single pathogen in a very short period of time."

White-nose syndrome first emerged in New York state in 2006. The fungus has now been confirmed in bat colonies across the northeastern United States and the Canadian provinces of Quebec and Ontario. Bats as far west as Oklahoma and as far south as Tennessee have also been infected. No one knows how the disease came to North America, but humans may have unwittingly carried the fungus from Europe.

Exactly how white-nose syndrome kills and whether some bat species are more vulnerable than others are open questions. What is known is that white-nose is virulent. In some infected caves, 90 percent to 100 percent of bats die, according to the U.S. Fish and Wildlife Service. On average, the disease takes out 73 percent of the bat population at a given hibernation site.

Little brown myotis bats aren't the only bats affected by the disease, but as the most common North American bat, they're particularly important to the ecosystem. To find out how the little brown bat is likely to fare, researchers from Boston University and the University of California Santa Cruz collected data from 30 years of bat surveys taken at 22 caves in the Northeast. They found that before the introduction of white-nose syndrome, little brown bat populations were stable or rising.

Next, the researchers ran computer simulations to test the future effects of the white-nose fungus. They performed 1,000 different simulations, including multiple environmental variables to make the models as realistic as possible.

The results were "dire," said Winifred Frick, a postdoctoral researcher affiliated with Boston University and UC Santa Cruz and lead author of the research paper. Even if the white-nose death rate slackens to 10 percent a year, the researchers found, the species will be wiped out from the region within 65 years. The death rate has to drop below 5 percent a year to give the little brown myotis a fighting chance in the next century, Frick said.

The bat's possible extinction is on par with the destruction of the American chestnut tree by a fungal blight in the early 1900s, said Altizer. Once the most common hardwood in the eastern United States, the chestnut all but disappeared within a few decades and has never recovered.

The loss of the little brown myotis and other bats affected by white-nose would be particularly catastrophic for humans, Frick said, because bats eat their body weight in bugs each night. Many of these bugs are agricultural pests or carriers of human disease.

There is still a lot of uncertainty as to the future of the little brown myotis, Frick said, particularly because researchers don't yet understand how population declines from white-nose syndrome will change over time. With such a limited understanding, there is little humans can do to save bats or eradicate the fungus, she said.

"Really, we need more research," Frick said. "We need to study the transmission dynamics to better understand how this is spreading from bat to bat, as well as from site to site … At this point there's not a silver bullet for a cure."