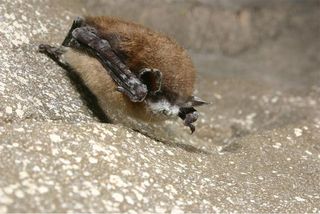 This little brown bat, found in a cave in New York, is infected with a Geomyces fungus that has coated its muzzle, ears and wings white.
(Image: © Al Hicks, NY DEC.)

Bats are getting moldy and dying, and this is no Halloween trick. Now scientists have identified the culprit in the deadly mystery.

The killer is a member of a group of cold-loving fungi called Geomyces. This white, powdery-looking fungus coats the muzzles, ears and wings of bats and has meant death for more than 100,000 of the night flyers in the northeastern United States.

"So essentially these bats are hanging on the cave ceiling almost like a piece of food that you've forgotten about in your refrigerator and for whatever reason now they're getting moldy," microbiologist David Blehert of the U.S. Geological Survey told LiveScience.

A big question remains: Why has this murder mystery only surfaced recently?

The fungi live in the soil, water and air, and now on bat skin. They can survive refrigerator-level temperatures, which are typical of many caves where bats hibernate. Once beneath the outer layer of skin covering a bat's wing, the fungus multiplies, sometimes causing the wing to bulge to five to 10 times its original thickness.

The researchers are not sure if the fungus is the sole exterminator of infected bats. Most of the fungus-infected bats are also emaciated and some leave their caves during the cold of winter in search of insect food, in vain. The fungus could be the cause of starvation or it could have invaded the skin of starving bats whose immune systems would have been depressed, the researchers speculate.

The work will be detailed in the Oct. 31 issue of the journal Science.

Bats covered with the fungus, a sickness now called white-nose syndrome, were first spotted in Howes Cave near Albany, N.Y., during the winter of 2006. At that time, field biologists reported caves that were typically covered with hibernating bats had loads of vacancies, which the scientists assume is because the bats either died or were flitting around in search of food. In one case, a cave floor was littered with dead bats.

Since then, scientists have estimated drastic declines in populations of cave-hibernating bats in Connecticut, Maine, New York and Vermont. In some caves, more than 75 percent of the bats have perished.

"We found that this fungus had colonized the skin of 90 percent of the bats we analyzed from all the states affected by white-nose syndrome," Blehert said.

The fungus had invaded deep into the skin of infected bats. The fungal spores likely sneak into the bats' skin through hair follicles or sweat and oil glands. The fungi continue to multiply and push their way through other skin layers until they've broken through the outer layer called the epidermis and reached a layer of connective tissue, the researchers suggest.

And while the fungus is genetically a member of the genus Geomyces, it looks different from the known Geomyces species.

"A typical Geomyces has club-shaped spores and these are curved or shaped like little bananas," Blehert said.

The caves where bats hibernate from late October through late April or early May in the northeastern United States could be the perfect spots for fungal growth, the researchers say.

Fungi in general do best in moist environments, and so it's no surprise that the researchers found more infected bats in the most humid caves. In addition, this particular fungus can survive at temperatures between 36 degrees and 60 degrees Fahrenheit (2 degrees to 15 degrees Celsius), which are typical in caves.

The bats also lower their core body temperatures to match that of the caves, making their bodies perfect hideouts for the fungi. (In addition, bats lower their heart rates from about 1,000 beats per minute to four beats a minute during hibernation.)

He added, "The bats have done this for millions of years. They have hibernated in these same caves using the same physiological mechanism, dropping their heart rates down, not eating, dropping their core body temperature down, and they didn't used to get moldy."

Why now? The bats may have ingested some environmental contaminant that is causing them to starve, Blehert said, or pesticides may have wiped out their food source, keeping the bats from fattening up before entering caves for hibernation. Their emaciated bodies would then be susceptible to invasion by the fungus.

Another possibility is that the fungal infestation is irritating the bats' skin. The irritation could cause the bats to wake up more often during hibernation. While hibernating bats typically wake up for short periods every two weeks or so, the fungi could cause more frequent wake-ups. These mid-hibernation arousals are costly as the bat warms up its body and turns on other body processes like its immune system. That means the wake-up could use up critical energy in the form of fat reserves, causing the bats to starve.

Blehert plans to continue studying the fungi and its link with bat deaths to get to the bottom of the batty mystery.