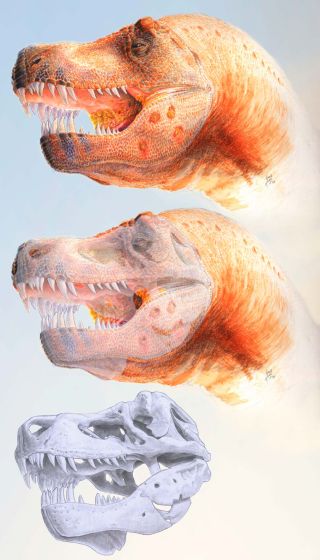 A reconstruction of the Trichomonas-like infection of the T. rex commonly known as "Peck's Rex." Note the yellowing at the back of the mouth and the lesions in the jaw that penetrate the full thickness of the bone.
(Image: © Chris Glen, University of Queensland)

The famous dinosaur known as Sue — the largest, most complete and best preserved T. rex specimen ever found — might have been killed by a disease that afflicts birds even today, scientists now suggest.

The remains of Sue, a star attraction of the Field Museum in Chicago, possess holes in her jaw that some believed were battle scars, the result of bloody combat with another dinosaur, possibly another T. rex.

Now researchers suggest these scars did not result from a clash of titans, but rather from a lowly parasite. The infection in Sue's throat and mouth may have been so severe that the 42-foot-long, 7-ton dinosaur starved to death.

The ailment the scientists propose felled Sue and other T. rexes is trichomonosis, also known as trichomoniasis. In birds, the disease is caused by Trichomonas gallinae, a single-celled protozoan. Although some birds, such as pigeons, commonly host the parasite but suffer few ill effects, in birds of prey such as falcons and hawks, the germ causes a pattern of serious lesions in the lower beak that closely matches the holes in the jaws of Sue and occurs in the same anatomical location.

"It's ironic to think that an animal as mighty as 'Sue' probably died as a result of a parasitic infection. I'll never look at a feral pigeon the same way again," said researcher Steven Salisbury at the University of Queensland in Australia.

The researchers investigated the jaws of Sue and 60 other tyrannosaur specimens. Nearly 15 percent of them possessed lesions that had previously been attributed to bite wounds or, possibly, a bacterial infection. These holes were roughly 0.2 to more than 1 inch wide (0.5 to more than 2.5 cm), extending through roughly a half-inch (1 cm) of bone.

The scars of combat among tyrannosaurs and other dinosaurs are not uncommon, but differ notably from trichomonosis lesions, explained researcher Ewan Wolff, a vertebrate paleontologist at the University of Wisconsin in Madison. The holes the parasite makes are often neat and have relatively smooth edges, while bite marks are often messy, scarring and puncturing bone.

Tyrannosaurs are known to have fought amongst themselves and sometimes even ate one another. The parasite may have been passed through face-biting or cannibalism.

Wolff noted there is no known evidence of trichomonosis in other dinosaurs.

"This leads us to suspect that tyrannosaurs might have been the source of the disease and its transmission in its environment," Wolff explained.

For the disease to cause such lesions in the jaws of Sue and other tyrannosaurs, it would have had to be at an advanced stage.

"The lesions we observe on Sue suggest a very advanced stage of the disease and may even have been the cause of her demise," Wolff said.

The parasite typically concentrates in the back of the throat in birds of prey, where it leads to masses of dying tissue.

"As the lesions grow, the animal has trouble swallowing food and may eventually starve to death,” Salisbury said.

These findings strengthen the many connections that research already suggests exist between dinosaurs and birds, with birds inheriting a similar or even the same parasite from their distant ancestors.

"The discovery gives us an insight into the dinosaur immune system," Wolff said. "The response of tyrannosaurs to this trichomonosis-like disease is almost identical to that found in living birds. These simple holes in tyrannosaur jaws give us a dramatic example of an avian-like defense system in action."

The scientists detailed their findings online September 29 in the journal PLoS ONE.