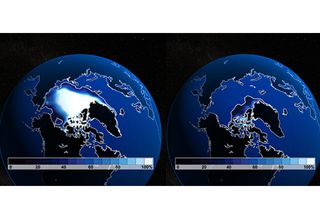 The image at left, based on simulations produced by the Community Climate System Model, shows the approximate extent of Arctic sea ice in September. The model indicates the extent of this late-summer ice could begin to retreat abruptly within several decades. By about 2040 (image at right), the Arctic may be nearly devoid of sea ice during the late summer unless greenhouse gas emissions are significantly curtailed.
(Image: © Â©UCAR)

Perennial sea ice in the Arctic is melting faster each summer than it can be replaced during winter, a new study confirms.

A study released last year found that perennial sea ice—which is at least 10 feet thick and remains throught the seasons and through the years—dropped 14 percent from 2004 to 2005.

The new study, detailed today in a NASA statement, finds that the ice is not being replaced, threatening the overall stability of the Arctic summer ice cap, which other studies have predicted could disappear completely by 2040.

When perennial ice disappears, it is sometimes replaced by thinner seasonal ice, some of which melts the following summer.

"Recent studies indicate Arctic perennial ice is declining seven to 10  percent each decade," said Ron Kwok of NASA's Jet Propulsion  Laboratory. "Our study gives the first reliable  estimates of how perennial ice replenishment varies each year at the  end of summer. The amount of first-year ice that survives the summer  directly influences how thick the ice cover will be at the start of  the next melt season."

Using satellite data from NASA's QuikScat and other data, Kwok studied  six annual cycles of Arctic perennial ice coverage from 2000 to 2006.  The scatterometer instrument on QuikScat sends radar pulses to the  surface of the ice and measures the echoed radar pulses bounced back  to the satellite. These measurements allow scientists to  differentiate the seasonal ice from the older, perennial ice.

Kwok found that after the 2005 summer melt, only about four percent of  the nearly 965,000 square miles of thin, seasonal ice that formed the  previous winter survived the summer and replenished the perennial ice  cover. That was the smallest replenishment seen in the study.

As a  result, perennial ice coverage in January 2006 was about 14 percent  smaller than the previous January.

Ice can be depleted either by melting or by floating away. In 2005, the study found, the typically  small amount of ice that moves out of the Arctic in summer was  unusually high—about 7 percent of the perennial ice coverage  area. Kwok said the high amount was due to unusual wind conditions at  Fram Strait, an Arctic passage between Antarctic Bay in Greenland and  Svalbard, Norway. Troughs of low atmospheric pressure in the  Greenland and Barents/Norwegian Seas on both sides of Fram Strait  created winds that pushed ice out of the Arctic at an increased rate.

The effects of ice movement out of the Arctic depend on the season.  When ice moves out of the Arctic in the summer, it leaves behind an  ocean that does not refreeze. This, in turn, increases ocean heating  and leads to additional thinning of the ice cover.

These findings suggest that the greater the number of freezing  temperature days during the prior season, the thicker the ice cover,  and the better its chances of surviving the next summer's melt, according to the NASA statement.

"The  winters and summers before fall 2005 were unusually warm," Kwok said.  "The low replenishment seen in 2005 is potentially a cumulative  effect of these trends."

"The record doesn't show any hint of  recovery from these trends," he stated. "If the correlations between  replenishment area and numbers of freezing and melting temperature  days hold long-term, its expected the perennial ice coverage will  continue to decline."

Kwok points to a possible trigger for the declining perennial ice  cover. In the early 1990s, variations in the North Atlantic  Oscillation, a large-scale atmospheric seesaw that affects how air  circulates over the Atlantic Ocean, were linked to a large increase  in Arctic ice export. It appears the ice cover has not yet recovered  from these variations.

"We're seeing a decreasing trend in perennial ice coverage," he said.  "Our study suggests that, on average, the area of seasonal ice that  survives the summer may no longer be large enough to sustain a stable  perennial ice cover, especially in the face of accelerating climate  warming and Arctic sea ice thinning."