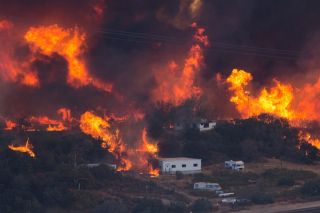 Flames sweep through a rural community at the Blue Cut Fire on Aug. 17, 2016, near Wrightwood, California.
(Image: © David McNew/Getty Images)

Wildfires burn millions of acres every year, leaving death and destruction in their wake. While natural causes (and climate change) play a part, nearly all wildfires are caused by people. Also, the number of wildfires has increased in recent years, and they are burning longer.

U.S. wildfire losses during the past 10 years have totaled $5.1 billion, according to Verisk Analytics, a data-analytics provider that serves the insurance industry. About 4.5 million U.S. homes are at high or extreme risk of wildfires.

In California, the Mendocino Complex Fire has become the state's largest wildfire in modern history, according to the Los Angeles Times. As of late August, the fire had burned 283,800 acres (115,000 hectares). It has also destroyed around 170 homes and other structures. Four out of California's five largest wildfires have occurred since 2012. [Related: Photos Show Horrifying Scenes from California Wildfires]

Wildfires are on the rise, according to a 2006 study published in the journal Science. The authors compared the frequency and duration of fires between two periods. Between 1986 and 2003, wildfires occurred nearly four times as often, lasted about five times as long and burned more than six times the land area, compared with the period between 1970 and 1986. The change in frequency was "strongly" associated with regional spring and summer temperatures.

Discussions about the causes of wildfires often focus on whether land-use management practices or climate change is the primary cause. The authors of the Science study investigated 34 years of western U.S. wildfire history together with data on the hydroclimatic factors (how water affected the areas) to determine where the largest increases in wildfires have occurred and to evaluate how recent climatic trends may have been important causal factors.

They concluded that while land-use history and climate are often portrayed as competing factors, actually they may be complementary explanations in some cases. Past land uses — including allowing the accumulation of biomass — have probably made some forests more sensitive to changes in climate because more fuel is available. "Hence, an increased incidence of large, high severity fires may be due to a combination of extreme droughts and overabundant fuels in some forests," the authors wrote.

Over the long haul, though, climate may still be the primary driver of wildfire risks, they wrote. On a decadal scale, the amount of moisture shapes the character of the vegetation (allowing species that are more resistant to drought to thrive, for example, but making them less resistant to climate variability). On shorter time scales, climate variability affects the flammability of live and dead vegetation.

While drought, heat and wind create the perfect conditions for a wildfire, most fires don't happen spontaneously. Lightning is a common natural igniter. In 2017, lightning set off nearly 8,000 wildfires, which burned 5.2 million acres (2.1 million hectares) in the United States, according to the National Interagency Fire Center (NIFC).

Most blazes are caused by humans, not lightning, though. According to the NIFC, there were 63,546 human-caused wildfires in 2017. About 4.8 million acres (1.9 million hectares) were burned.

There are many ways these fires start. For example:

Firefighters use an array of strategies to contain wildfires. One of the simpler strategies is using a "flapper." A flapper is a metal pole fitted with a flap of rubber on the end. A firefighter will use it to beat out small patches of fire (called hotspots) around the edges of the main fire to prevent it from spreading. Other members of the "hand crew" will clear out a line of brush to halt the spread of the fire. Hand-crew members often work 12-hour shifts. Sometimes tractors and bulldozers will be brought in to help the hand crew get rid of the area's vegetation faster.

Another tactic is to bring in water trucks and spray down the grass and trees in the predicted direction the fire will take. The wetter the area, the less likely it will be to catch fire. Sometimes the perimeter and roof of a home are thoroughly wetted to save it from an oncoming fire.

Large fires are combatted with planes or helicopters that scoop water from nearby lakes or other bodies of water using massive buckets (some hold up to 3,000 gallons, or 11,356 liters) attached to their undersides to dump on the fire from the air. Others have built-in tanks that are filled with water and flame-retardant chemicals to dump on the fire. Attacking fires from the air is called aerial firefighting.

When the fire can't be reached by vehicles, "smokejumpers" will be brought in. There were around 270 smokejumpers in the U.S. in 2017, according to Fire and Aviation Management. These firefighters parachute out of planes into the wildfire. Firefighting tools, food and water are dropped by parachute nearby — enough equipment to make them self-sufficient for 48 hours. The smokejumpers fight the fire using chainsaws and other tools to cut down vegetation that may be potential fuel for the fire.

Fighting fires is not only dangerous, but very expensive. In 2014, the U.S. Forest Service and the U.S. Department of the Interior spent $200 million more than the agencies budgeted to put out that year's fires.

Many of the world's wildfires can be prevented by human intervention. Firefighters and forestry services, for example, often start controlled burns to clear overgrown brush and forest areas so that if a wildfire does occur, it won't get out of hand.

Civilians can help to prevent forest fires in these ways: