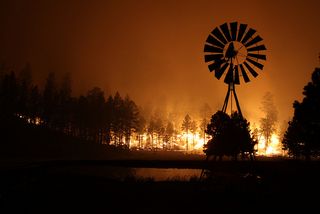 The 2011 Wallow Fire was the largest in Arizona's history, burning more than 500,000 acres. A lack of frequent surface fires, allows fuel to build up resulting in enormous fires like this one.
(Image: © Jayson Coil, U.S. Forest Service.)

The economics of wildfires are complex and grow more so as environmental conditions evolve. The average wildfire season has stretched from five months in the 1970s to seven months today, according to the report "Playing With Fire" from the Union of Concerned Scientists. But effective planning has not kept pace. Fire suppression this year has cost the U.S. Forest Service and U.S. Department of the Interior $200 million more than the agencies budgeted.

According to the FLAME Act Report — a congressionally mandated assessment of those expenditures — putting out forest fires will cost the federal government $1.6 billion before year-end.

While some states, such as Arizona and New Mexico, avoided mega-fires this season, others have struggled. In California, more than 4,500 wildfires have burned 85,000 acres (344 square kilometers). A typical wildfire season there sees 3,500 wildfires impacting 74,000 acres (300 square km). Farther north, the Carlton Complex — the largest fire in Washington state's history — is still smoldering behind containment lines.

As wildfire season becomes longer and more severe, it seems only natural that it will continue to grow become more expensive. However, ecologists and economists point out that the preventative methods of mitigating fire also equate to huge cost savings.

Official costs only part of the story

According to the Western Forestry Leadership Coalition, a partnership between Western forestry professionals and government leaders, the true costs of wildfires tend to be between two and 30 times greater than fire-suppression costs. The official price tag of the 2011 Wallow Fire, which burned 538,000 acres (2,177 square km) in eastern Arizona, was $109 million. But this figure includes only suppression and initial rehabilitation of the land. It does not reflect the value of the 32 homes or dozens of other buildings destroyed. It also excludes the lost resource and recreation-based jobs, the tourist dollars that ultimately flowed elsewhere, the drop in property values and the deflation of tax collections.

Northern Arizona University (NAU)'s School of Forestry estimates that Arizona's previous record holder of acres burned — the 462,000-acre (1,870 square km) Rodeo-Chediski fire in 2002 — cost $300 million. Suppression costs of that fire were only 15 percent of the total. The rest came from long-term land-rehabilitation efforts and insured-property losses. [The Two Wildfires Everyone Should Be Talking About (Op-Ed )]

NAU's Arizona Rural Policy Institute developed a more comprehensive cost estimate of 2010's 15,000-acre (60 square km) Schultz Fire north of Flagstaff, Arizona. Despite the fire's relatively small footprint, official costs of the Schultz Fire were nearly $59 million. Those figures reflected the expenses of government agencies and local utility providers, but missed the financial losses faced directly by the people within the region. The RPI estimated that property values in the neighborhoods closest to the fire depreciated by $60 million, and post-fire flooding cost homeowners an additional $8 million. Overall, the economic impact of the Schultz Fire — which burned no structures — was between $133 million and $147 million. In comparison, preventative methods, such as thinning the forests in the area of the Schultz Fire, would have cost only $15 million.

According to the Ecological Restoration Institute (ERI) at NAU, forest treatments in Arizona typically thin 30 percent of an area at a cost of between $500 and $1,000 per acre. Applying even the high point of that cost range to the footprints of the Wallow, Rodeo-Chediski and Schultz fires implies a worthwhile return on treatment costs. Even the most conservative of the estimates suggest that treatment costs would equal only a fraction of the eventual impacts of fires — from 51 percent for the Rodeo-Chediski Fire to 11 percent for the Schultz Fire.

Sadly, such examples have yet to effectively influence federal policy. The $200 million spending deficit mentioned above will likely drain funds meant for treatment. A lack of significant treatment efforts equates to a continuation of current conditions — a cycle that values response over prevention. While thinning isn't a guarantee against runaway fire, the bill looks, in hindsight, like a worthy investment.