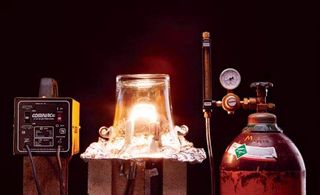 The stick welder provides enough juice to heat the tungsten to nearly 5,000Â°F, the ice bucket acts as the bulb, and the helium displaces oxygen from the bulb.
(Image: © Mike Walker)

Editor's Note: This is one in an occasional series of articles from Popular Science's How2.0 department. The projects have varying degrees of difficulty depending on a project leader's experience, ranging from dabbler to master.

Thomas Edison famously spent months trying to make a lightbulb work. He tested one material after another in an evacuated bell jar before he finally got a carbon filament to burn long enough to sell it with a straight face. When I had a free afternoon recently, I thought I'd see if I could do it too.

Edison's first mistake was living before tungsten wire was available. Tungsten is way better than carbon as a filament material, and now you can find it in any metal-supply shop. It lasts longer, is less brittle, and glows with a cleaner, whiter light. His second mistake, repeated in classroom physics demonstrations to this day, was using a vacuum to get the air out of the bulb. Clearing out the air is important because at yellow to white heat (3,500°F to 5,000°F), pretty much all known materials, even tungsten filament wire, react with oxygen and burn up in a few seconds. Remove the oxygen, and the wire can't burn. But a vacuum is the hard way to solve that problem. You need an expensive vacuum pump, a thick glass bell jar to withstand the pressure of the surrounding atmosphere, and several nonleaking pipe joints.

It's a whole lot easier to just displace the air with an inert gas that's at the same pressure as the surrounding air, which is how most modern bulbs work. Common household lightbulbs use a mixture of argon and nitrogen. Fancy krypton flashlights and xenon headlamps use those eponymous heavier noble gases to allow the filament to burn longer and hotter.

I used helium because it's easily available and lighter than air, allowing me to fill my bulb, an upside-down glass ice bucket (wedding present, I believe), from the bottom. The helium floated up, displacing the air inside. With a steady stream flowing in, I didn't even need to seal the bucket very well—I just wrapped a sheet of tinfoil over the bottom to keep eddies of air from wafting in.

For a filament, I used a thick tungsten wire I had lying around the shop and, for the power supply, a small stick welder I got at an auction. It supplied about 50 amps at 30 volts, giving me a 1,500-watt bulb. When I powered up the filament without the bucket in place, it produced a prodigious quantity of tungsten-oxide smoke and didn't last very long. But with the bucket on and a steady flow of helium, the filament glowed brightly and cleanly.

It must have been truly thrilling for Tom when he finally got one of these things to work for the first time. I know I was thrilled, even though I slaved over mine for only about 30 minutes and it worked perfectly the first time—well, the first time I didn't forget to turn on the helium.

Symbol from: The German wolfram, "tin wolf," because it interfered with tin refining

Vote for the Greatest Modern Mind

Some of Ben Franklin's Quirkiest Ideas